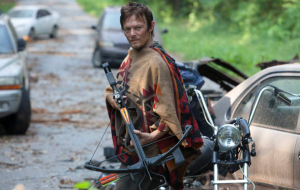 ‘Say the Word’ begins with Andrea (Holden) and Milton (Roberts) at a neighbourhood party while Michonne (Gurira) glowers from the sidelines. As the festivities carry on throughout the town, The Governor (Morrissey) is seen brushing his daughter Penny’s hair. Penny is a zombie who has been chained, straight jacketed, and gagged.

Daryl (Reedus) takes Maggie (Cohan) to find supplies for the baby while Rick (Lincoln) is almost catatonic from the death of Lori.

The Governor joins in on the town’s festivities and Michonne takes the opportunity to snoop around his apartment and retrieve her katana. After leaving through the back door, she finds a herd of imprisoned zombies. She uses her newly regained katana to open their cage and kill them all. The Governor speaks to Michonne about what she did and she threatens him with her blade then leaves.

The Governor speaks to Andrea (Holden) to turn her against Michonne and succeeds. Michonne leaves town and Andrea refuses to go with her.

Merle (Rooker) and his henchmen capture more zombies and return them to camp. The evening celebrations involve Merle and another man fighting in a circle of chained up zombies. Andrea is disgusted, calling the event barbaric and sick. The Governor lets her in on the secret: the zombies have been de-toothed and are no threat — it’s a ritual designed to show people they don’t need to be afraid.

Rick is holed up in the room where Lori died. Suddenly the phone starts ringing. The episode ends as he answers the phone.

‘Say the Word’ lacked the punch of the preceding four episodes but it was enjoyable nonetheless. There was enough conflict between major characters to keep me interested. The Governor is a character that has a new layer nearly every time you see him, although a reoccurring layer does seem to be charming creep.

Rick has reached a breaking point and it’s heart wrenching to see our hero so lost. I look forward to seeing his inevitable return.

“People with nothing to hide don’t usually feel the need to say so.”