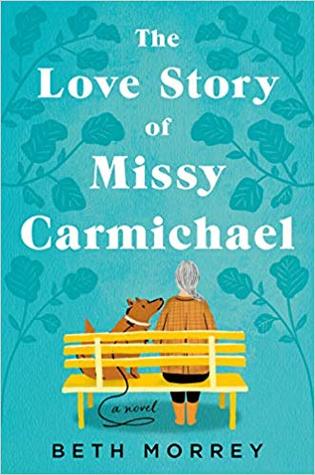 HarperCollins is publishing Saving Missy in Australia and provided my review copy. However, Penguin Random House is publishing it elsewhere under the title The Love Story of Missy Carmichael, which gives much more positive overtones to the story. The display image is PRH’s because HC hadn’t put their cover on their website at the time I scheduled this post.

Prickly. Stubborn. Terribly lonely.
But everyone deserves a second chance… A dazzling debut for 2020 – are you ready to meet Missy Carmichael?

Missy Carmichael’s life has become small. Grieving for a family she has lost or lost touch with, she’s haunted by the echoes of her footsteps in her empty home; the sound of the radio in the dark; the tick-tick-tick of the watching clock.

Spiky and defensive, Missy knows that her loneliness is all her own fault. She deserves no more than this; not after what she’s done. But a chance encounter in the park with two very different women opens the door to something new.

Another life beckons for Missy, if only she can be brave enough to grasp the opportunity. But seventy-nine is too late for a second chance. Isn’t it?

For readers of Eleanor Oliphant Is Completely Fine and A Man Called Ove, a life-affirming, deeply moving “coming-of-old” story, a celebration of how ordinary days are made extraordinary through friendship, family, and the power of forgiving yourself–at any age.

This puts a much more positive spin on the story.

Please note: I wrote this review in response both to the story and the presentation, including the title ‘Saving Missy’ and HC’s blurb. Had I seen PRH’s title and blurb earlier than 5 minutes ago, when editing this review to schedule it, my review would have been different.

At 78 years of age, Missy Carmichael is a lonely old woman. She used to be too busy to reach out to others, too focused on her husband, but now she is alone. One day she’s in the park and sees a boy who reminds her of her grandson living overseas. She seeks a connection. Two women respond, opening up a world Missy never knew. They are saving Missy.

Saving Missy and representation of the elderly

It’s refreshing to see an elderly woman in a story that is so relatable. Missy’s husband has gone, and her children have moved away, isolating her after she gave up her career to spend her life focused on caring for them. Now, Missy flees connections because she’s afraid of how people view her. She’s isolated, but that isolation is not unique to her generation. Human connection is essential, so Missy hovers around the edges of groups in the park, in a café, just like the human herd animals Hugh Mackay discusses in his sociological nonfiction. (See Mackay’s Turning Point, 1998.)

Morrey’s representation of Missy feels in part loving but in part a condemnation of the older generation. We all have our regrets, just like Missy. But equally we do the best we can with what we have. There’s little to no acknowledgement of this for Missy. Morrey appears to judge Missy for giving up her career, for complying with her husband’s wishes that resulted in Missy’s isolation. The official HarperCollins book blurb also condemns Missy as the architect of her own suffering. And yet Missy’s story provides insight into loneliness and isolation as the result of an abusive, unequal marriage.

Millennials and GenXers to the rescue

The reverse of this is that it is younger people who save Missy. None of those who reach out to Missy and support her in this novel are of Missy’s generation. Not one. Instead, it is millennials and GenXers unite to bring her out of her shell. Although in reality they would barely have time for her. Except maybe to pity her. This makes for a nice story, very flattering to younger generations, but also highly unrealistic. (I’m not a Boomer, ok? And Missy was born before the Boomer generation began.)

Even Brexit is worked into the story to heap more condemnation upon Missy, to give her another source of guilt.

One of Missy’s children is a lesbian. Although Missy suspected, it was at her 30th birthday party that she came completely out of the closet and introduced her partner. Although Missy accepted this, her abusive husband didn’t. Neither Missy nor her daughter even wanted the big birthday bash: it was Missy’s husband that wanted it. He wanted to show off his clever daughter and bask in glory. And he was furious when she made a speech and made the night about her birthday and her partner. Cue family row.

Not only was Missy accepting of her daughter’s sexuality — merely trying to fend off a family row — but Missy also accepts a gay couple without question. Her comments in the narrative, both as dialogue and internal musings, are focused on the appearances of the couple and their dogs.

Dogs are a major feature of the story. And perhaps I’m being unfair when I criticise the story arc because I’ve never had the opportunity to frequent a dog park as a dog owner.

Although the narrative tends to blame Missy Carmichael for accepting her husband’s requirements in the home, the story does engage with issues of domestic violence. This is violence perpetrated towards another woman, Bob the dog’s owner, who is a minor character. However, her husband threatens other women, including Missy. The way this is handled is inspiring although a man who is prepared to be violent towards his wife and to threaten two women, one of them elderly, may in reality have been violent. Morrey’s solution is not to be emulated without understanding that there is grave risk.

For all my criticisms of this contemporary fiction novel, I heartily enjoyed it. The characters are engaging, especially Bob the dog. During the climax, tragedy strikes; my husband got up one morning to find me with tears streaming down my face because Saving Missy is so emotionally engaging. I cared about the characters. Misdirection leads to a minor twist that gives more depth to the story. Characters working together in give and take, developing mutual interest, is aspirational. Saving Missy is an unusual intergenerational character-driven story featuring an elderly woman as a central character, giving hope that it’s never too late.