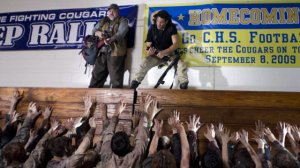 Unable to sleep due to Carol’s weeping, Daryl heads back into the woods with Andrea  and continues the search for Sophia.

As Carl’s condition deteriorates Rick and Lori are forced to accept that they may have to consent to the surgery without crucial supplies. Just as they decide to allow Hershel to operate without additional medical equipment, Shane returns with supplies but without Otis.

Shane explains to the others that Otis willingly sacrificed himself to the zombie horde that had them surrounded so that Carl may live. Through flashbacks, however, we see Shane shooting Otis in the leg so that he could escape with the medical supplies.

At this point in The Walking Dead, it is becoming easier to work out which characters will have the power to endure the zombie apocalypse and which have just lucked out so far.

The plot of ‘Save the Last One’ has a lot of filler to allow scattered storytelling of Otis’s fate through Shane’s flashbacks. The result is an episode that sacrifices a lot of audience engagement for a plot twist that can be smelt out a mile away.