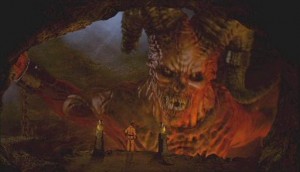 ‘The Satan pit’ is part 2 to the story begun in ‘The Impossible Planet‘.

Warning: spoilers for ‘The Impossible Planet’.

At the close of the previous episode, the Doctor and Ida descended to the ancient city via the drill shaft to investigate and, hopefully, salvage the anti-gravity device that enabled the salvage crew to land on this planet orbiting a black hole. Rose remained on the surface in the station with the remainder of the crew, including Toby Zed, the demon-possessed archaeologist.

The ‘beautiful’ city – a little like Moria but not nearly as pretty – is a nice resting place for interstellar travelers.

A seal on the ground evokes memories of the Seal of Rassilon for fans of Classic Who, except this seal is enormous to fit the persona of the enormous demon determined to destroy the universe if only he can escape the Satan Pit.

Demonic control of the ‘low intelligence’ Ood slave race threatens the crew on the surface who race to evade and outwit the masses.

Although usually humanist and atheist in outlook, this episode of Doctor Who strongly implies an original demon who became the archetype of all demons throughout all mythology. This gigantic mindless beast who escapes before he escapes is a conundrum unsolved by those who wrote and produced the story.

‘The Satan Pit’ is not New Who‘s finest hour although I confess it’s not dissimilar to stories like ‘Robots of Death’ from Classic Who. I’d really like to see a higher standard of writing as science fiction – even on television – has come so far in the ensuing decades.