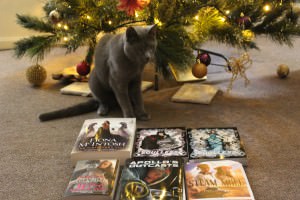 Ok so this particular Santa Claws is possibly a bit more Claws and a bit less Santa, especially after a hard day’s sleeping in less than optimal weather conditions.  I mean, it got positively TOO WARM in the living room, I had to hide in the lounge room with darkened windows.

Anyway, I’d better get on with this.  Then it’ll be OVER WITH and I can GO BACK TO SLEEP.

The Scrivener’s Tale by Fiona McIntosh is a bit of a doorstopper but it’s not a brick.  Put it this way, if it landed on my tail, I’d be miffed but not murderous.  Unlike OTHER books I wouldn’t care to name.  [flicks tail]

This tale is set in France where they eat frogs and snails but not cats, so I’m happy.  It’s also set in this other place called Morgravia, which I assume is in Europe.  Or South America.  Somewhere equally irrelevant because I’VE NEVER BEEN.  Now, if I’D been there, it would BE IMPORTANT.

Soulless the Manga Volume 1 and

Soulless the Manga Volume 2 by Gail Carriger with artwork by Rem…  While ignoring the servant who is DYING to comment on this series of novels that she loves being recreated as manga, I discovered this post by Rem about developing the artwork for this series.  Yen Press seem to be the cats – eh hem – the PEOPLE responsible.

Personally, I object to the werewolves JUST LIKE THE VAMPIRES.

At least, in this series they do.

Nor do they sparkle.

Wild about you by Kerrelyn Sparks is about shape shifters.

It’s not every day that Elsa Bjornberg feels delicate, not when she hosts a home renovation show where she can effortlessly demolish a kitchen. But from the moment she meets Howard Barr, this bear of a man makes her feel like a woman. And the way he looks at her, as if she were a pot of honey he’d like to lick . . .

Howard is not like most men. For one thing, he’s a shapeshifter. And he always thought his celebrity crush would never amount to anything more than drooling at Elsa on TV. When his meddling vampire employer gets involved, the star is suddenly within his grasp—and within a hair of her life. For an ancient curse forbids their newfound love, and Howard is suddenly torn between his desire for her and his desire to keep her alive.

Shapeshifter?!  He better not shape shift into CAT FORM.

Apollo’s Outcasts by award-winning author Allen Steele has interested John Denardo of SF Signal enough to write a synopsis, including mentioning some of Allen’s more notable achievements.  Personally, I’m not interested in ANYONE who lives with DOGS.   I don’t care if they’ve flown a space ship simulator or the real thing, living with DOGS is the ULTIMATE FAILING.

Steam Mole by Dave Freer is the sequel to Cuttlefish, a gentle alternative history story for children and teens that my servant reviewed here.  For more about Dave himself, listen to this interview.   I quite like Dave in spite of suspecting he’s more of a dog person than a cat person.  I would even allow him to cook a multi-course meal for me (listen to the interview for context), although I have a dainty appetite.  I might only eat a mouthful of each dish.  Only the meat, of course.

Now I’m going back to sleep.