Sandeep Parikh and Jeff Lewis of The Guild talk to Edward and Nalini Haynes of Dark Matter; the MP3 is at the bottom of this page. 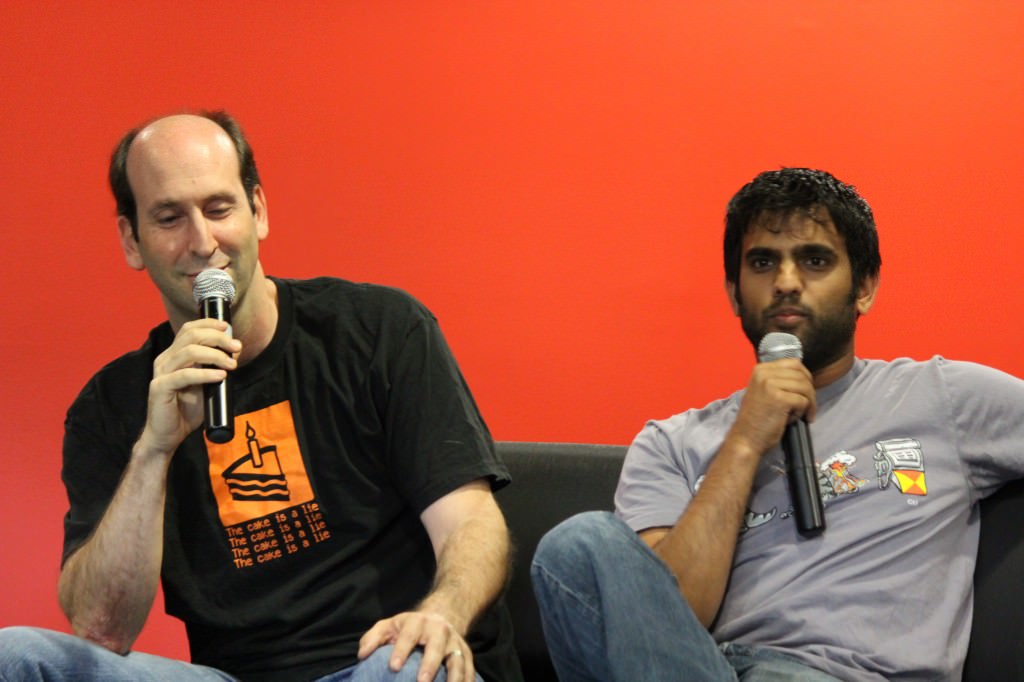 My round-up of the panel:

Jeff Lewis and Sandeep Parikh are comedians whose beginning was in stand-up comedy. They began the panel after playing around the dalek with Jeff sitting with Sandeep’s head in his lap. They discussed how warm Jeff’s groin was, and how Sandeep found that somewhat off-putting.

Sandeep talked about Stan Lee, and what a prima donna he was during his time in The Guild. He really hammed it up, but then made absolutely sure that everyone knew he was joking and that no prima donnas were involved in The Guild.

One thing led to another, and before I knew it, Sandeep was sitting on Edward’s (my husband’s) lap, with his legs across my lap. I was so surprised! Later Edward said he had to stop himself from bouncing Sandeep up and down, to which I replied that he should have – Sandeep would have loved that. Much later I realised I could have got an amazing close up, but the spontaneity threw me – I’m still getting the hang of this whole media thing. I kept patting Sandeep’s leg as if he was my son – well, Sandeep is cute and little. I swear, the reason he has that facial hair is because he’d get carded everywhere he went if he was clean shaven. Sandeep said that Edward’s groin was ice-cold, much more appealing than Jeff’s.

The banter between Sandeep and Jeff was terrific. They kept slipping into and out of their Zaboo and Vork characters. The best clue that Jeff was now out of character was the twinkle in his eye and the smile – a real contrast with Vork’s usual flat affect or angry demeanour. Sandeep and Jeff discussed everything from how it’s a bit worrying that Zaboo learns about how to be a man from Vork, but hey, you get it where you can, to how Sandeep started in comedy. Apparently Sandeep was the only ‘brown boy’ in his area growing up, so he was a target. Sandeep was told that he was the colour of shit, so his dad said to say that the boys calling him that were the undies that were shat in. Sandeep did, and learnt to run away really quickly. It appears he became the class clown, which led to a life in comedy.

Fans wanted to know if The Guild was doing another musical number this year. Previously Sandeep had told Dark Matter that they were hoping to do something this year, but during the panel he asked Edward if they were doing something. Edward, half-hopeful and possibly half-forgetting exactly what had been said, replied ‘Yes!’ Sandeep looked a tiny bit disconcerted – I’m wondering if their ‘special’ this year will be more along the lines of the previous Christmas special instead of another musical number.

It would have been great to get a DVD of the panel, both for the information and the comedy