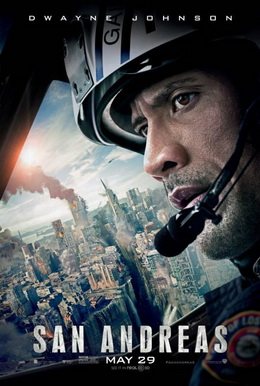 Rescue chopper pilot Ray (Johnson) flies to the rescue of his ex-wife (Gugino) and daughter (Daddario) after a series of earthquakes destroy everything along the San Andreas fault.

Let’s face it, most disaster movies have a pretty simple plot. They are there for the effects, the action, the cheesy lines and more effects. If you’re looking for an intellectual film with riveting plot and Academy Award-winning dialogue, you are barking up the wrong tree in the wrong forest on the wrong continent.

What San Andreas does bring to the table is a big burly lead male, an ass-kicking lead female, the ground shaking, buildings falling down and a really big tsunami. If this is more what you’re after then strap yourself in.

Dwayne Johnson feels like this generation’s Arnold Schwarzenegger. Can he act? Not well. Do you care? Not really. He is the epitome of the burly action star and I for one like it.

I had only seen Alexandra Daddario in the Percy Jackson movies before San Andreas. Both roles have shown her as a strong woman, especially San Andreas in which she spends most of the movie saving two blokes from themselves and the disasters.

The less said about Kylie Minogue’s appearance the better. However, for the sake of clarity, she was stiff, uninspiring, irrelevant to the plot and a complete waste of film.

Overall, San Andreas is a great representation of the disaster genre and one that fans of the genre should not miss.

‘The Earth will literally crack and you will feel it on the east coast.’