Samuel Maguire contributed to the Authors For Fireys fundraiser in January 2020. This mammoth undertaking was organised by Emily Gale and Nova Wheetman. They raised over $480,000 for firefighting equipment and to help Australia’s bushfire survivors, both human and animal.

Samuel’s original guest post on DMZ is here. However, I’ve copied over his introduction:

I’m Samuel Maguire, Brisbane author and professionally mentally ill person. I grew up in rural Queensland during a massive drought so constant bushfires was a big part of my life. It’s really easy to feel useless in the face of natural disasters. So I wanted to give people an excuse to participate as well as make some great memories in the process.

I don’t have much practical to offer, but I do have a lot of experience running pen and paper role-playing games. My contribution is a personalized role-playing adventure using my own home-brew game system that I have been developing for nearly twenty years. It is the same system that I am currently using to write my next book series Brambles. As icing on the cake I will make a damn fool of myself and dress up as a wizard for the entire thing.

Tiny Owl Workshop published my first book, No Point In Stopping, a memoir about Bipolar Disorder and wizard fights last year. My website has been running for a decade and there is a plethora of fiction, memoir and swear words up there for perusal.

I am a novice card maker but I made the pictured card. This is a thank you to Samuel for appearing as a guest on Dark Matter Zine and for supporting Australia’s firefighters. 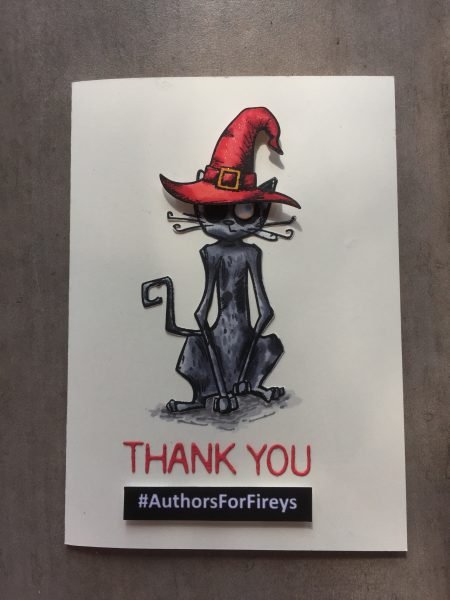 Samuel said he’d dress up as a wizard for his event so my mind immediately jumped to Unseen University in Terry Pratchett’s Discworld series.

But who would wear the hat? Being a novice cardmaker, my craft supplies were limited. I didn’t have any stamps or dies for a rotund wizardly figure as befits an Unseen U character although I’d LOVE some!

In the end I opted for a Greebo-like cat. Sure, Greebo is a witch’s cat but he’s a dynamo who rules the world.

Except in Witches Abroad. Greebo met his match there.