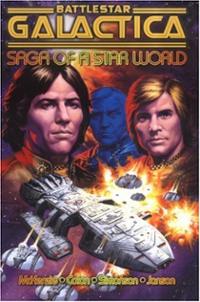 It’s the dawn of a new era, an era where the Cylons, creations of a reptile race who’ve outlived their creators, are about to forge a treaty with the 12 Tribes of humanity.

After annihilating most of the human race, the cylons pursue the ragtag remnants because you can’t have too much genocide.

Commander Adama (Lorne Greene — NOT the Host from Angel) leads the remaining 220 ships full of refugees and toxic food in search of Earth while battling the ragtag remnant of the 1%. Yes, even in this distant world, the super-entitled 1% are complete dicks willing to sacrifice the human race — including their wives — to ensure their personal comfort and convenience. Sire Uri (Ray Milland) is a case in point.

Colonel Tighe (Terry Carter) is Adama’s second-in-command. Boomer (Herbert Jefferson Jr) is the only pilot who can, with his good looks, carry off those ridiculous Egyptian-inspired helmets. I realise Battlestar Galactica was created in the wake of Chariots of the Gods, but really? Starbuck (Dirk Benedict) and Apollo (Richard Hatch) look ridiculous. And they’re not wearing flight suits fit for a vacuum in case they need to eject from their fighters.

The diverse cast is only spoilt by the obvious sexism in roles: women are wives, lovers, mothers, ‘socialators’ (sex workers), and receptionists — or, on the bridge, comms officers. But they’re not warriors or leaders. At least, not in the first episode.

Which brings me to Starbuck.

Starbuck got the role for his cheesy smile, his ability to chomp a cigar while grinning maniacally and, possibly, for being slightly buff — a feature that BSG takes no time to reveal, having Starbuck with one towel around his hips and another draped across his shoulders. Allowing the wominz and the menz so inclined to get an eyeful. Starbuck seems to feel quite comfortable so that’s no probs.

When Athena (Maren Jensen) is in her dormitory getting out of her flight suit — I mean, receptionist uniform — she reveals a translucent bodystocking with suspenders. [Queue stripper musak.] Starbuck walks straight into Athena’s dorm without knocking or even announcing himself. Athena hides behind her locker door while they talk. It’s obviously meant to be titillating but the blatant disregard for female boundaries was nauseating.

Anyhoo, they break up. Athena says something about not wanting to invest herself in a relationship because END OF THE WORLD.

So, Starbuck being the loyal, loving boyfriend that he is, immediately hooks up with Casseopia (Laurette Spang), a socialator (or sex worker) who is such a happy hooker that she does Starbuck for free.

Or until the jealous Athena squirts them with the steam gun. I admit I laughed but I also cringed at the whole “2 girls fighting over 1 guy” trope. I mean, Starbuck isn’t exactly a keeper, you know what I mean?

In contrast, Apollo, having lost his younger brother in the cylon attack, meets Boxey (Noah Hathaway), a little boy in need of TLC (tender loving care). At first it seemed Apollo thought of Boxey as a replacement brother but no, he’s more of a son. Because Apollo has the hots for Boxey’s mommy Serina (Jane Seymour, former Bond Girl). Awwww.

You know Battlestar Galactica has a well-deserved reputation for being camp? And not just camp but cheesy camp, right?

Go with it. CELEBRATE.

Baltar (John Colicos), traitor to the human race in the classic series, looks like an older version of Dr Gaius Baltar (James Callis) in the 2004 series. Some things stay the same.

And some things change. Did you notice the mention of intelligent reptiles? Well, in ‘Saga of a Star World’ there are also gigantic intelligent insects (cue mild horror themes). The 2004 series didn’t have any alien races, only humans and cylons, probably because Edward James Olmos’s (Admiral Adama) contract had an iron-clad clause in it that he would suddenly and irrevocably die ON SET (cue dramatic death scene) the moment they introduced aliens. Olmos has a thing about humanity and the human condition; he’s a man who stands and whose characters die by his ethical code.

And some things start at the pilot of the classic series. Like:

Seriously. Frak was in the pilot. FRAKKING AWESOME.

Now the most important question — “frakking” the incredibly destructive mining technique: was that named before or after Battlestar Galactica established frak and frakking as swear words?

The images were surprisingly clear; the minion wondered if they’ve remastered this series too? There were some scenes, like the “awesome” SFX with Apollo, Starbuck and Boomer clearing the mines in the nebula, that could have done with less clarity and more noise to obscure the SFX.

Plot-wise ‘Saga of a Star World‘ felt too long. It would have worked better if it’d been broken up into at least 2 episodes as it felt like 2 different stories and it dragged in the transition phase. But overall, the pacing was ok. It helped that I had vague memories of the second half, enough to know there are horror themes. The horror aspect of it is mild as long as you don’t linger over what is done to whom, just move along. Nothing much to see here.

The minion purchased Battlestar Galactica the boxed set. The boxed set of the entire series, the 1970s series, the series where they arrive on Earth, the 2004 series, the movies, the frakking lot. So now we’re wending our way through the series, indulging in nostalgia until someone sends me some SF TV series for review. [HINT]

When the world goes to shit, people turn to nostalgia. The minion is no exception. And I don’t mind — too much… but I would like some new TV to watch.

So far I’ve been pleasantly surprised. A series that I either saw in primary school or early high school (because SF took years to get to Tasmania), and here I am, frail and old, and it’s stood the test of time. As with Star Trek the Next Generation, I’d have to say Battlestar Galactica is holding up well against most of the current science fiction series I’ve seen, partly because the recent series seem to be competing to lower the bar. It’s possibly also because I expected camp and cheese and…

Well, I watched the series and the repeats as often as I could as a kid/teenager so, while the stories may be vague, I remember the overall feel of the show. I’m watching it, expecting the suck fairy and finding that I’m enjoying this trip down memory lane.

Please send new TV shows before the warm fuzzies end and I feed the box set to the minion.