RUtopia was the closing talk of the Changing the climate: Utopia, Dystopia and catastrophe conference on Monday afternoon was Marshall Bell conducting an artist’s talk with Deborah Rose as interviewer.  This article was previously published in Dark Matter issue 1, October 2010, and has been dated on this website to reflect that date. 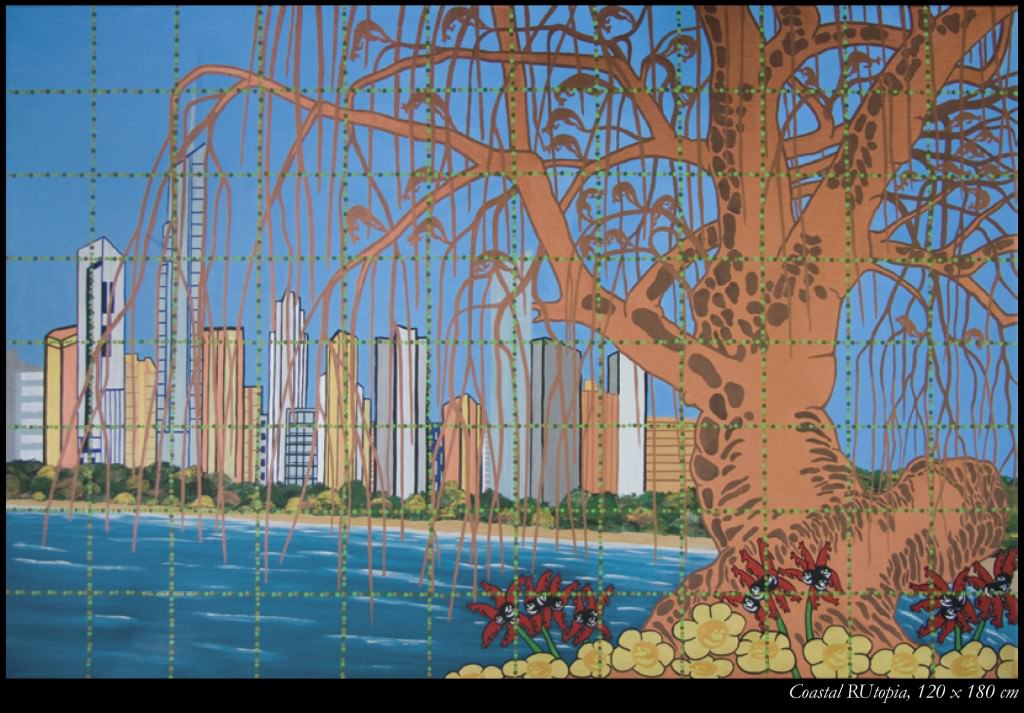 RUtopia was almost a Clayton’s exhibition as no original paintings were present for viewing, but paintings were viewed via a power point presentation.

Bell explained that he used to be a traditional artist, painting artifacts for sale in the tourist industry. Determined to bridge the divide, Bell strove to exhibit paintings in galleries, and was the first Native Australian artist to achieve this level of recognition.

Having researched the political and cultural history of the various Aboriginal tribes, Bell weaves the threads of this history into his paintings. In the above painting, Coastal RUtopia, Bell’s trade mark ‘stitching’ is shown to reflect the cultural heritage of stitching skins together. This gridding represents a form of art that died out over a century ago, belonging to Bell’s tribe. This stitching separates art from other areas because this particular tribe needed clothes. 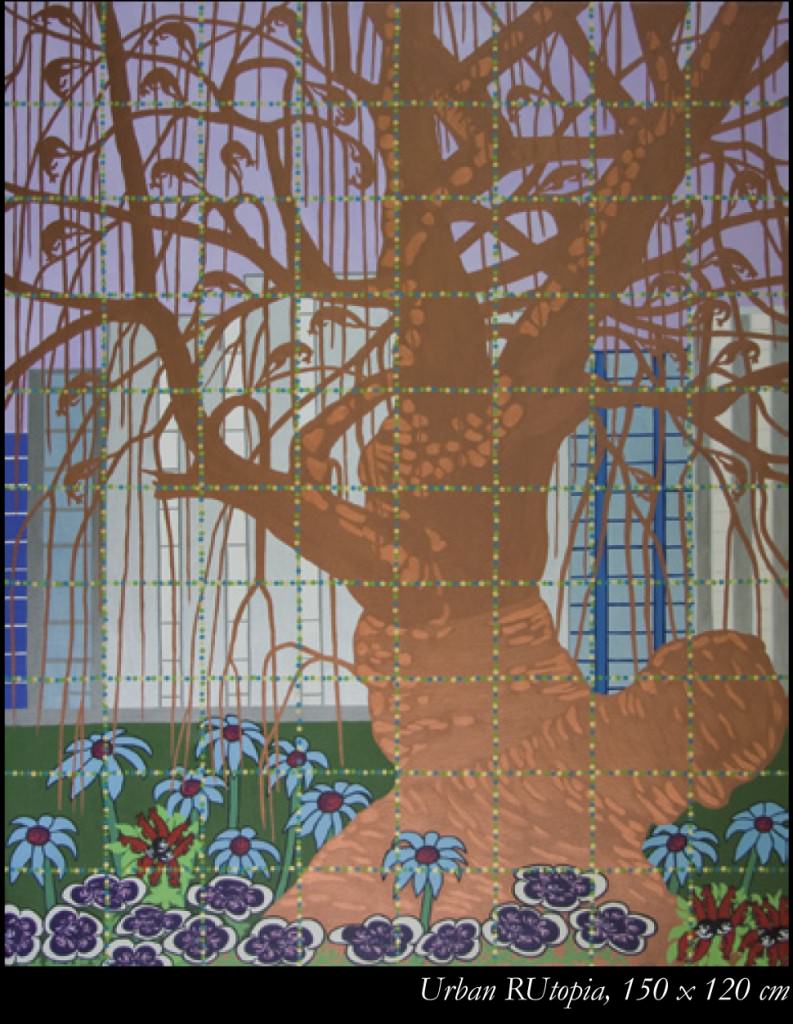 Bell’s thesis Why you paint like that examines imagery from South East Australian tribes, determining the inter-connectedness between different tribes’ art, the use of dots, circles, cross-hatching and supports or media. Support or media vary from tree-carvings, to ground carvings to clothing. Predictive modelling determines where and what style of art and the medium used for the various tribes.

Margaret Preston was, in Bell’s opinion, one of the top 3 or 4 white people who has lived in Australia. Preston took Aboriginal imagery and educated white people into acceptance. Preston was also heavily involved in setting up an anthropology course in Sydney. Bell also recognises Albert Nanageera as an influence.

The artist’s talk consisted of a power point presentation of Bell’s paintings as Bell spoke to each of them, explaining his imagery and goals. Remarkable creativity and humour were revealed during this talk. 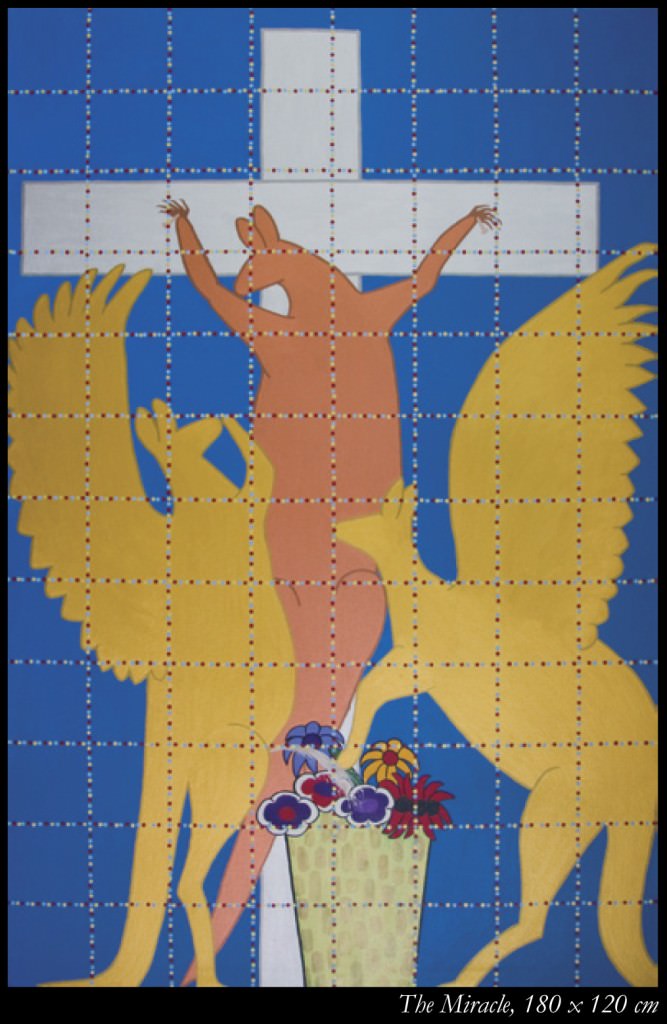 Bell explained that he has acquired Christian mythology and reinterpreted it for his culture. In The Miracle (left), Bell shows the Aboriginal culture and people who were crucified when White Australia sent the army to invade the Aborigines in the last decade. The yellow kangaroos are white people. The kangaroo urinating represents John Howard, who is urinating on kangaroo shaped flowers, also representative of the Aboriginal people and culture. This is poignant and yet the use of colour brightens the dark humour, serving to leaven the political message. 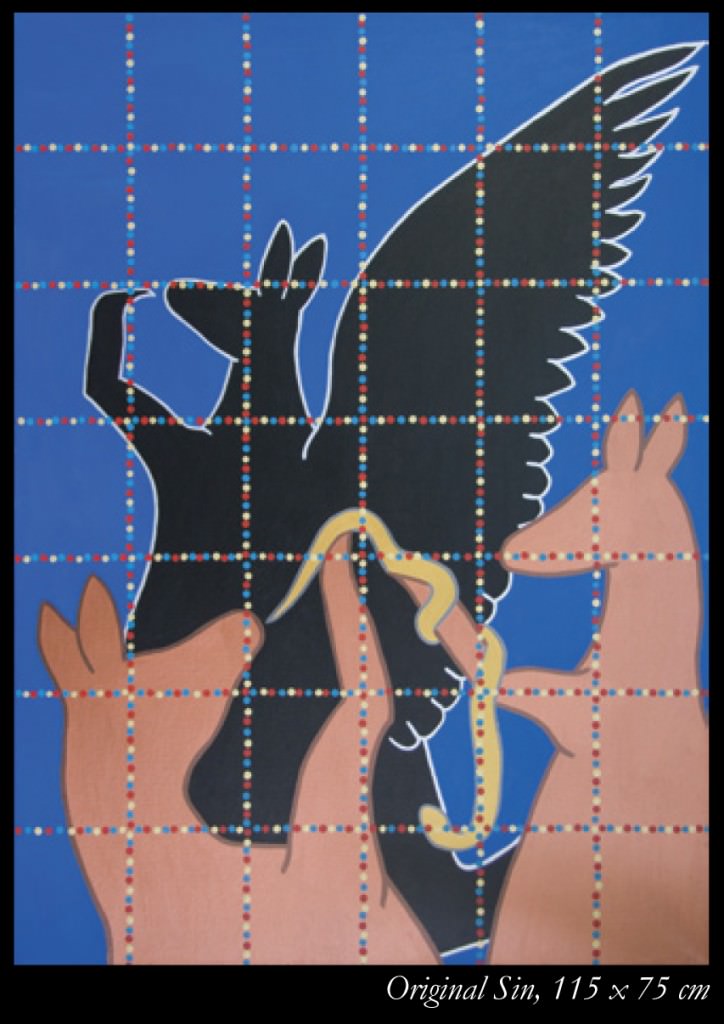 ‘How do you know Adam and Eve were white? They ate the apple not the snake!’ exclaimed Bell. In Original Sin (right), the Fall from Christian mythology is reinterpreted. The black angel/kangaroo is rooting on sin.

RUtopia combines culture, history, political comment and skill to present an alternative history and alternative future. While Bell’s message may be confronting, the humour and vivid colour leaven the experience. RUtopia is a vibrant, appealing body of work.

For more information about Bell’s work go to the Woollongabba Art Gallery, or e-mail the Gallery on email@wag.com.au.