Ruby Tuesday Matthews (not the model) lives in the bush near a small town where her mother grew up. Nana just died. Ruby’s mum, Celeste, is a paraplegic after a horse riding accident. Celeste is also incredibly secretive about her past, not wanting anyone to know she was a famous classical pianist who’d been an integral part of a now-famous band. Ruby is isolated and lonely, struggling to cope.

Anyhoo, Ruby won’t sing for anyone other than her mum. She gets drunk at a party, sings, someone records her and shit-posts it to mock her. Someone else rapes her while she’s drunk. She tries to cover up, worried people will slut-shame her.

It sounds much “heavier” when I sum it up than it felt reading it. This is actually a story of healing. We follow Ruby from rape to healthy loving relationship.

Although the rape is traumatic for Ruby, the event is over very quickly for the reader. Then we journey with Ruby while she processes what happened and begins the healing process.

Celeste, Ruby’s mum, is a paraplegic. Representation here is very mixed. I suspect the author does not have personal experience of being a paraplegic. However she hits some of the beats well. Your average “I use my imagination” misappropriation is very different from this depiction in Ruby Tuesday. And yet, Lawrence’s depiction is, in my opinion, still ableist.

Ruby feels self-conscious that people stare when she gets her mum’s wheelchair out of the car (although you’d think even a small town would be over that after 7 years). Ruby also feels that she looks after her mum although it also appears she only provides occasional transport for Celeste, who is otherwise independent. Emphasis on the nondisabled gaze troubled me.

People patronise Celeste but she’s a sassy bitch who answers back. <3

The biggest problem I have with this representation is that Celeste hid herself away from all her friends and supports except her Nan. No one bothered to keep in touch. Her former boyfriend, a wealthy musician, “couldn’t find her”. (Step one: try using the White Pages and contacting her mum.) Also apparently Centrelink wasn’t providing any support to look for work; it appears she’s just a “useless eater” who spends her days playing the piano in private, in secret, for the love of it.

Sure, Celeste had a history (explained) of cutting people off if they let her down (like Ruby’s father). However, her isolation appears to be Paul Darke’s “normality genre” in reverse: the disabled person isolated herself geographically to remove the (disabled) conflict.

And it took nondisabled people to pull her out of her self-imposed isolation. Seems a rather “white saviour” to me, especially after Celeste explains she “lost her music” and had to find it again. She *had* found it, years before the novel, and yet preferred to stay broke, isolated and unemployed instead of using her connections and talents to do something about her situation. Like, I don’t know, get a job. Which Centrelink pushes disabled people to do if there’s any chance of employment. Besides, who wants to live way below the poverty line when they have a choice?

I give the representation of disability 2.5 out of 5 stars. Lawrence shows some understanding of disability while also writing for the nondisabled gaze and reinforcing the dominant (ableist) discourse about people with disabilities. Luckily this was a subplot secondary to the rape and healing process.

Ruby Tuesday follows Ruby, a teenager, through a healing process from rape to a loving relationship (with someone else). It’s full of hope. Ruby’s mum is a paraplegic whose representation is realistic in some ways but ableist and not realistic in others. Overall I recommend this book as great Young Adult fiction. Just take the representation of disability with a spoonful of salt.

Read this if you enjoyed Break The Fall by Jennifer Iacopelli. 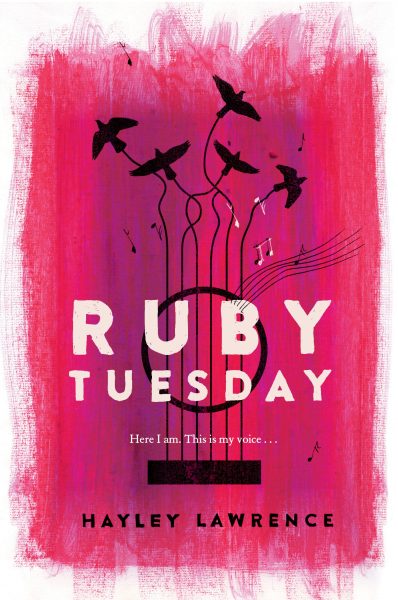