Emma Dawes (Celia Pacquola) is getting married. You’d think it’s to Daniel McCallum (Luke McGregor) but no, they’re best mates. Emma goes off to Bali on her honeymoon while Daniel drives into Rosehaven, the small town where he grew up. He’s moved there to help his mother manage her real estate business because she’s having health issues.

Emma shows up on his doorstep. She says her husband left her during the honeymoon so she’s come to visit Daniel, hiding from her life in Melbourne and her mother who keeps phoning her. You’d almost think these two have mother issues. It’s a nice change from daddy issues.

Daniel’s struggles; everyone calls him ‘Danny’ in spite of repeated reminders that he’s Daniel. He finds it difficult to speak to certain people and impossible to assert himself. He’s universally disregarded, put down and disregarded. Daniel tries. Over and over. One episode is a bit Groundhog Day although he’s not in a time loop.

Rosehaven is populated with caricatures and eccentrics, all of whom remind me of people I know.

Comedic conflict abounds like when the Neighbourhood Watch decide they don’t like a guy so they won’t allow him to be the town’s locksmith. And they decide Daniel will tell him so.

Both Emma and Daniel have potential romances (not each other) as well as ‘nightmare rain’ and mothers to deal with. Possibly the most striking feature of Rosehaven is I sense the two leading characters are intended to remain best mates and not become romantically entwined. I love this! There’s more substance and more potential for the series, plus it’s awesome to see a man and a woman be friends.

Even if Emma is really annoying at times.

And Daniel! His intonation is awkward, turning sentences into questions and, sometimes, sounding like a loose slide in a trombone although much, much quieter and more timid.

Non-Tasmanian viewers are educated in how Tasmanians see “the mainland”; I’m waiting for some wanker to refer to it as “the north island”. We haven’t seen anyone refer to Taswegians yet (Tasmanian residents not born in Tasmania). Tasmania receives its expats returning in one of two ways: applaud the conquering hero or look down upon the returning loser. The locals keep telling Daniel that he returned “because you can’t cut it on the mainland”.

In the opening scenes I thought Rosehaven was probably set ‘down the Channel’ (south of Hobart near the Derwent Estuary) and I was right: it’s set in Geeveston and New Norfolk. No wonder it seemed so familiar. The landscape is picturesque. I’m guessing it was filmed in autumn or possibly spring because it’s foggy and cold but not frosty at either end of the day.

A couple of episodes in I realised Rosehaven is the new Seachange. Instead of escaping the big city for a quieter lifestyle but finding romance, small town politics and evil developers, we’re watching a small town boy returning home, facing his past and growing. Or not. And Emma, likewise, has issues she needs to face, like a husband, mother and a life in Melbourne. Rosehaven is a relatable romantic comedy drama series lighter than Utopia and Hollowmen but with an Australian flavour more along the lines of Please Like Me.

I only received one disc for review, so I watched the first 4 episodes. As soon as I was hooked, Roadshow cut me off! [sad face] 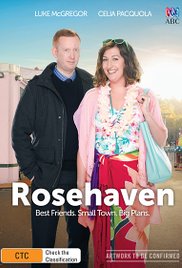