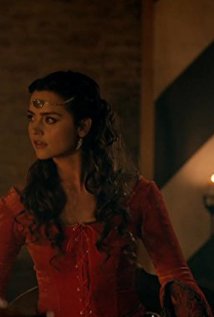 ‘Robot of Sherwood’ is a cheesy pantomime episode aimed squarely at families and pizza-lovers. Clara (Jenna Coleman) wants to visit Robin Hood. Although the Doctor (Peter Capaldi) is somewhat annoyed, they land the TARDIS in Sherwood forest to be greeted by an arrow in the TARDIS and an over-acted Robin Hood (Tom Riley) who does everything except a dance number from Monty Python’s Men in Tights.

The sheriff gathers gold and rounds up slave labor for the castle, accompanied by silent knights.

Robin Hood and his annoyingly Merry Men (Ha. Ha. Ha.) hear about an archery tournament and decide to go, even knowing it will be a trap.

The Doctor is incredibly annoyed by the Merry Men’s merriness. He takes hair and blood samples and even a sandal, all the time displaying a gift for physical humour not quite matched by the script. Clara glows with joy at seeing her hero. The Doctor may be jealous; he might want to be Clara’s hero.

At the archery tournament, Robin is about to win the golden arrow (that, apparently, will only feed one family for a year in spite of medieval prices) so the Doctor intervenes. Arrow after arrow is shot into the shaft of the previous arrow until the Doctor loses his temper.

The script gets even more corny from here. Corn with cheese. Cheese with corn. With extra cheesy corn toppings. To fully appreciate this episode you must love cheese. Beware if you’re lactose intolerant.

There are significant problems with the plot, not least of which is that the Sheriff, a medieval local, has gained control of mechanical men and a space ship and he’s building computer circuitry to repair the ship with very clunky moulds. Later that ‘circuitry’ becomes some kind of hole-riddled shielding to prevent the ship blowing up; I suspect they changed the script part-way through and forgot the visuals they’d given us. Then [really, totally, end-of-zode spoiler] a golden arrow shot through the air to hit the outside of the ship increases the gold content in the ship to propel it into space where the explosion doesn’t harm anyone. Really? Did no-one think a vaguely cohesive plot was at all important?

If you enjoy over-the-top pantomimes, Robin Hood comedies and rollicking family fun without needing a sensible plot, you will absolutely adore ‘Robot of Sherwood’. If not… [shrug]