Rob McDonald contributed to the Authors For Fireys fundraiser in January 2020. This mammoth undertaking was organised by Emily Gale and Nova Wheetman. They raised $513,149 to support firefighters and to help Australia’s bushfire survivors.

Rob MacDonald is a Kiwi living in Melbourne with his two daughters. And an extended rainbow family including HarryCat and Stevie Nicks the chicken. He attended Faber Academy’s Writing a Novel Stage 1 and Stage 2. So an excerpt of The Nancys was published in the Faber Writing Academy ‘Writing a Novel’ Anthology, Allen & Unwin (2016). While studying journalism, Rob realised that writing fiction, rather than reporting facts, is his true calling. The Nancys was Highly Commended for an Unpublished Manuscript in the 2017 Victorian Premier’s Literary Awards.

I am a novice card maker but I made the pictured card. This is a thank you to Rob for appearing as a guest on Dark Matter Zine and for supporting Australia’s firefighters. 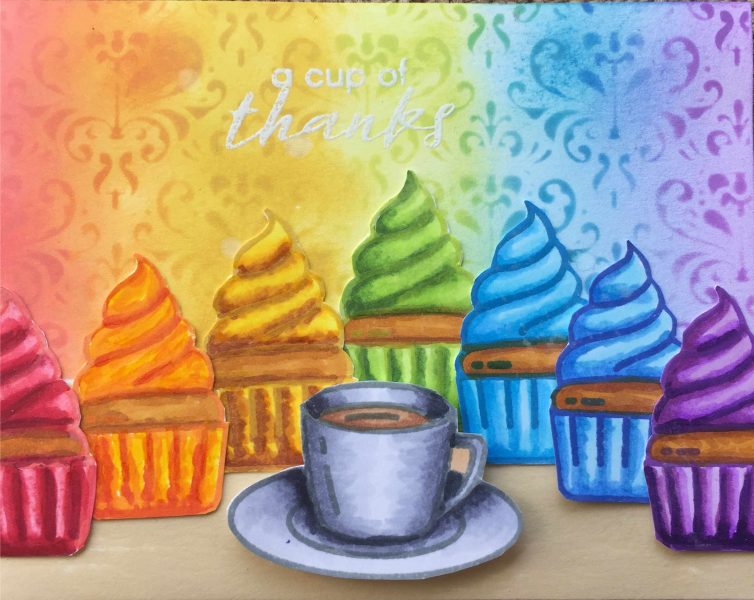 This card was A SAGA. First, I had trouble with masking and stamping.

When I cleaned the stamping platform to avoid black smudges, I dropped the base. The base of the platform was fine but both the magnets shattered. So far I’ve found two pieces that total less than one magnet. They’re physically INCAPABLE of holding the paper in place on the platform; the paper sticks to the stamp and moves. Which causes problems with re-stamping.

I finally managed to stamp a double row of cupcakes on a page but decided the thick (REALLY thick, thicker than normal) outline was not my thing. Perhaps I’m just not used to it?  Anyway, I thought my cupcakes looked like daleks.

So, instead of a rainbow card, I made this. 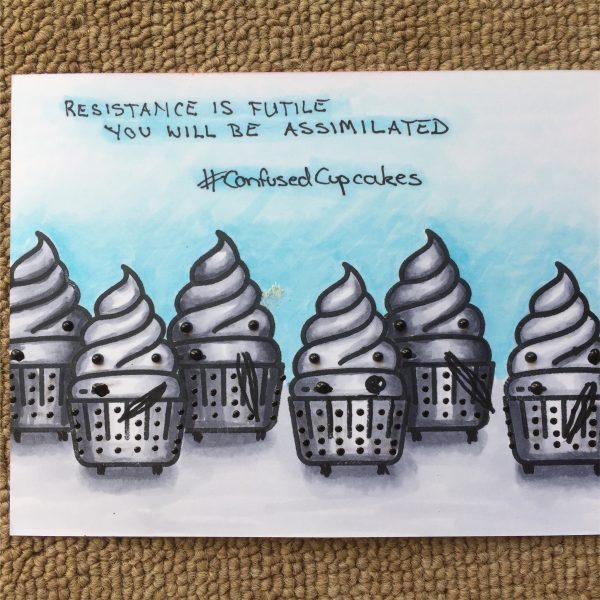 Resistance is futile, you will be assimilated #ConfusedCupcakes

I alternated between the cards until I finished both.

Back to the rainbow card

After printing my bold black outline, I re-stamped the cupcakes in various colors and colored them in using Copic markers. Then I cut them out. Same with the cup.

For the rainbow background, I masked the floor with post-it notes then used various colors of ink, put down a plain layer then came back over it with the same color in the same place (eg abandoned coral ink in the red stripe) but using a damask stencil. I started on the left and struggled with it, for every stripe I changed my method, my application tools, my style using those tools. Eventually, for the very last stripe (argh) I achieved a result I was happy with.

I seriously considered throwing out the background but the rainbow is still pretty and, like I’ve said before, if I throw out imperfect cards there won’t be any cards to mail out.

So, with this in mind, I masked the rainbow side of the card and tried using an ink brush then an ink blending tool to put some antique linen ink down for the floor. Argh. I reinked the pad (again). It was still going to take FOREVER. I wiped the ink pad along the base of the card a few times and was pretty happy with the result. It looks a bit like faux-wood flooring; I thought about putting more texture in with copic markers but decided the card was pretty busy already.

Finally, I stuck it all together.

It’s not how it was supposed to look in my head but I thought it was a decent effort and I love the cheerful rainbow. Then I looked at the photo on the big screen. SHUDDER. I could see all the imperfections that nondisabled people could probably notice in a glance. But still, I’m persevering. And I’m giving Rob McDonald (and other card recipients) the gift of my time to indicate appreciation.

Follow your dreams, persevere in the face of flaws, and create!