Jim C Hines published a trunk novel he wrote in college, Rise of the Spider Goddess, with some edits pointing out common errors for aspiring writers. This was gutsy, especially coming from a professionally published author. Rise of the Spider Goddess is, in turns, cringe-worthy, cheesy and hilarious; sometimes it’s the text, sometimes it’s Jim’s editorial comments snarking at his younger self.

In contrast, I received feedback from a literature-oriented teacher last semester. Prior to this assignment she gave feedback including needing more interiority; she said she wanted more of Maria’s reactions to Saul; the only paragraph I wrote all semester that she actually half-liked (she wanted the other half deleted or changed) was a metaphor for Maria’s interiority so I was sure to include a metaphor for her conflict below. This is the opening scene of a book that I submitted as part of one assignment last semester for the subject ‘Building a Strong Narrative’ and the feedback I received: 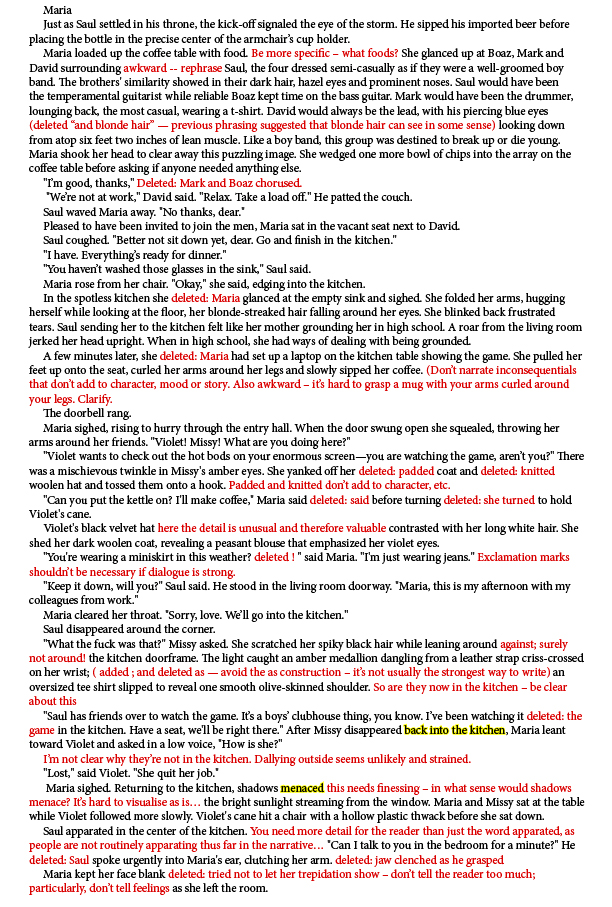 Which goes to show that aspiring writers need to learn, need to be open to feedback and need to find a suitable editor or teacher to work with them.

In 2006, DAW Books published Jim C. Hines’ debut novel Goblin Quest. But before Jig the goblin, before fairy tale princesses and magic librarians and spunky fire-spiders, there was Nakor the Purple, an elf who wanted nothing more than to stand around watching lovingly overdescribed sunrises with his pet owl Flame, who might actually be a falcon, depending on which chapter you’re reading.

This is Nakor’s story, written in 1995 and never before shared with the world. (For reasons that will soon be painfully clear.) Together with an angsty vampire, a pair of pixies, and a feisty young thief, Nakor must find a way to stop an Ancient Evil before she destroys the world. (Though, considering the relatively shallow worldbuilding, it’s not like there’s much to destroy…)

With more than 5000 words of bonus annotation and smart-ass commentary, this is a book that proves every author had to start somewhere, and most of the time, that place wasn’t very pretty.

Within hours of the above post, David Freer posted about writing too. I particularly like these bits:

The purpose of your writing is not to display perfect grammar, or lyrical prose, or the perfectly structured novel. It is to communicate with the reader…

… if I was going to give you one bit of advice, it would be reaching those goals is a lot easier once you’ve learned to tell a simple story, simply and clearly, so that most readers get exactly what you’re trying to say…

Chuck Wendig weighed in with a post about what to buy the writer in your life for Christmas.

I agree with the coffee stuff. I obviously don’t have enough coffee in my life because I’m not producing enough words.

I also agree with the solo writing space that does not include the interwebs or other people. Because SPACE. And choosing when to rejoin the human race.