Rise of the Mythix tells the story of humans becoming reincarnated personifications of formerly mythical animals. There’s a prophecy and an evil dictator with magical powers pursuing them for his “collection”.

In Flight of the Griffin, the griffin-human, Jimmy, shows up to rescue the “unicorn” Kelly, Minotaur Minh (who is probably Asian), and Stanley of Sherwood who, although middle aged to elderly, is an expert archer.

Kelly, Minh and Stanley are in jail awaiting the Collector’s pleasure. And his pleasure is to “paint” them. That is, to magically insert them body and soul into paintings.

There is running. And screaming.

Start at the very beginning. It’s a very good place to start.

And starting at book 3 drops the reader into the middle of the action with no clue as to how these humans acquired their mythical aspects. Loads of other questions either remain unanswered or are only hinted at throughout the book. I’m pretty sure Anh Do addressed these issues in previous books.

As a reader who loathes books that spend too much time recapping the book I’ve just finished, I appreciate that Anh Do doesn’t do this. However, an optional re-cap at the beginning would be awesome.

Flight of the Griffin vs minorities

Minh is probably, as I said, an Asian. This is a guess based primarily on his appearance NOT on the cover but in some of the interior illustrations.

Women are equal opportunity bad guys in Flight of the Griffin, as they serve as soldiers alongside men. Plus a woman leads the troops.

However, Kelly is the only female hero at this stage, a 1-to-3 ratio. When the Mythix start rescuing people, it seems more women and girls need rescuing than men. And there’s a baby but we don’t know the gender.

Kelly is cast as nurturer, healer, and the protagonist most focused on rescuing a girl and baby. However, this is balanced against her totally saving the guys’ asses. For this segment of the story arc at least, Kelly is the most powerful of the 4 protagonists, who work together as a team.

Because of Kelly, I have no hesitation in recommending this book to girls for its representation of women. However, I hope future books introduce more female protagonists with more diverse roles.

Rise of the Mythix is a story arc told in small portions so as not to overwhelm reluctant readers and readers-in-development. Unfortunately, it also means those readers need to access the entire series from start to finish in order to reach a satisfying conclusion. I applaud Anh Do for writing books enticing reader development because literacy is important. Engendering a love of reading has life-long benefits. Rise of the Mythix is a fun read for primary schoolers and a “cool” series to read, so reading will have social as well as literacy and academic benefits.

As a parent who struggled financially while my kids were in primary school, the $15.99 per book could be prohibitive. My son both reads and plays the guitar now, a decade after he left home, thanks to his father and I cultivating his love of literacy and paying for music lessons even when we struggled financially. I encourage carers to procure books that your kids enjoy, whether that means begging, buying or – my personal best source of books as a kid – borrowing from the library. 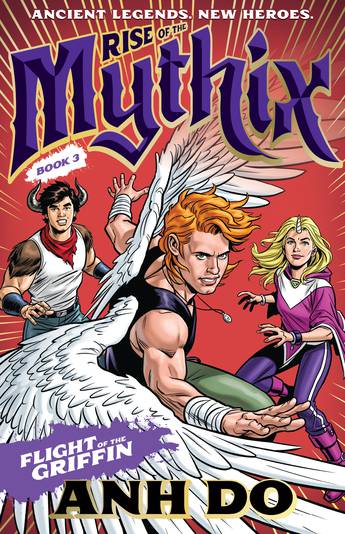