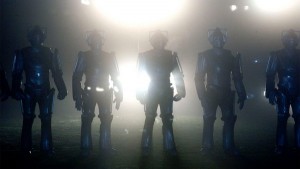 The TARDIS goes out of control because the Time Vortex ceases to exist. Later in this story, the Doctor (Tennant) changes that to ‘we fell through a crack in time’.

The Doctor immediately gives up on the TARDIS, saying she’s dead, verbally writing her off without making any effort to fix her although Mickey asks if she can be fixed. Then it’s just that they’re out of power because they’re in the wrong universe… Oh, wait, now we have a power source that can recharge off the Doctor’s life-force…

One of the things that really annoys me in New Who is this “We can’t possibly do X because Y” then, a few minutes later, they’re doing X regardless and Y ceases to matter. This is really poor writing; if I submitted stories of this standard for assessment, I’d get VERY LOW grades. I wonder how the makers of Doctor Who justify such sloppy writing. But then, I’ve heard that some Doctor Who writers have boasted about how they can bash out a script in a day. If your measure of success is how little effort goes in to writing then I guess New Who is a fairly consistent winner. Except for the stories I love that took a BIT LONGER TO WRITE. [pointed look]

I digress. BACK TO THIS STORY.

The ‘Rise of the Cybermen’ is set in a parallel world; for once Mickey is the smart one, recognizing the location from what he’s seen on TV. In spite of this, the Doctor keeps calling him ‘Mickey the Idiot’, which seemed unnecessary and inappropriate, especially considering the family audience. Way to go to support bullying and name-calling, Doctor Who!

Pete Tyler, Rose’s dad, is not only alive in this parallel world, he’s a successful businessman (although with overtones of ‘used car salesman’). Rose wants to see him, ignoring the Doctor’s advice. Having been ignored, the Doctor comes with Rose, helping her to violate his instructions with no mention of what happened when she saved her father’s life.

Meanwhile, Pete and the President of Great Britain meet with John Lumic, a villain with overly-wide-open eyes indicating insanity, overacted by Roger Lloyd Pack. Lumic is dying but wants to live forever so he illegally mandates experimentation on homeless people to develop cybernetics that will support his brain after body-death. The only person in this story in a wheelchair is the villain and he’s insane to boot.

Pete and the President attend Jackie Tyler’s birthday party with the ‘hired help’ including the Doctor and Rose. This will not going to end well.

The ‘Rise of the Cybermen’ is the first episode in a two-part story. Again Doctor Who has gone for the steampunk aesthetic, with dirigibles above London and a bizarre wheelchair/life support package for Lumic. As an alternate genesis of the cybermen, the ‘Rise of the Cybermen’ is fairly plausible although I have issues with other, non-birth-of-the-cybermen aspects of the story.

Then there’s what happens at the party… but I’ll discuss that in my review of part two.

I’m giving the ‘Rise of the Cybermen’