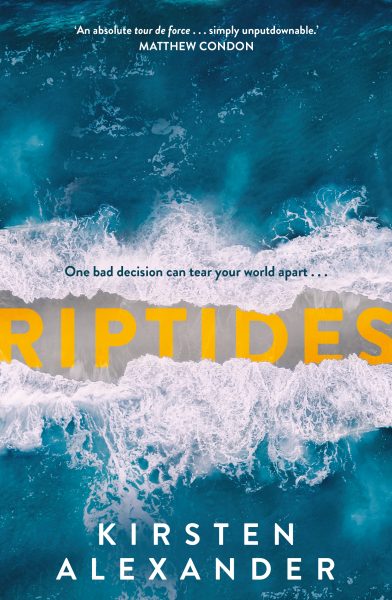 Set in Queensland, Australia in 1974, Riptides (due for release on 4 February 2020) by Kirsten Alexander centers around siblings Abby and Charlie. She is a twenty something wife and mother, just about to start a new chapter studying law. He is home for Christmas, begrudgingly, away from his life running a restaurant with his two best friends in tranquil Bali. Both are dreading the onerous task of visiting their father at his rural property. On the drive, they accidentally swerve into the path of an oncoming car, which swerves to avoid them and crashes. The young stranger behind the wheel is dead before they get to her, the baby in her belly is not. They are in the middle of nowhere, and help feels out of reach. They make an impossible decision, and the secret will both tear them apart and bind them together.

A confronting but convincing read

Riptides is a grounded, tense story of an impossible predicament. The circumstances surrounding the accident are plausible, as are the motivations for the decisions Abby and Charlie each make from that point onwards. The accident scene is particularly confronting to read because it feels so real. As a mother, reading about the unborn baby squirming inside its dead mother’s belly was particularly gut wrenching. This is not a fun read, but it is convincing.

Alexander does a good job at placing the story at this moment in history and in the Queensland setting. It feels authentic, and of course is vital to the story. If mobile phones were around in 1974 things would have ended very differently. Of course, they were not, and consequently the crash begins a series of events, throughout which Abby and Charlie struggle with the weight of their secret.

After the initial scene of the crash, the story flounders for a while as Abby and Charlie process what they have done. We find out who the woman was and how she connects to them, but they spend time just doing regular family type things, trying to act normal. The tension is still there, but it’s whispering rather than shouting.

The story picks up again after a few chapters as facts about the woman’s past come to light, and Abby and Charlie feel obliged to intervene and better the lives of people she left behind, whether wanted or not. Bizarrely, they have a connection to almost every character in some way, which seems strangely convenient, but doesn’t detract from the story.

What started as an accident and a difficult choice becomes a haphazard adventure involving a cult, crooked cops, betrayal and family loyalty. None of their lives are the same after this summer. The joy of reading this novel is that the characters do grow and develop. Somehow they seem to come out better people at the end, which, considering the number of questionable choices they make, is admirable. It makes what is at times a tough read ultimately worthwhile.

Riptides is a gritty, compelling story of impossible decisions and inevitable consequences. It’s set in 1970’s Queensland and captures the landscape and culture of that time and place in a way that feels authentic. For those who enjoy Australian fiction with a good dose of suspense, Riptides should be on your reading list this year.

Those who enjoyed the Good Liar movie may enjoy this novel. – Editor