Richard Fairgray talked to Nalini Haynes of Dark Matter at Armageddon 2011 with lots of background noise: this interview is available in text only.

Hi. I work for Beyond Reality Media and run Square Planet Comics.

What can you tell me about them?

Beyond Reality is an online comic website where we publish five different titles, one page each, five days a week. The title that I co-write is called The Inspiration Duncans and it is a really bizarre story about a guy who discovers aliens attached to the back of everyone’s necks that sort of look like weird testicle creatures. I guess the tag line is that the only thing standing between humanity and certain doom is a guy with a bucket on his head for protection. It’s a pretty insane thing. 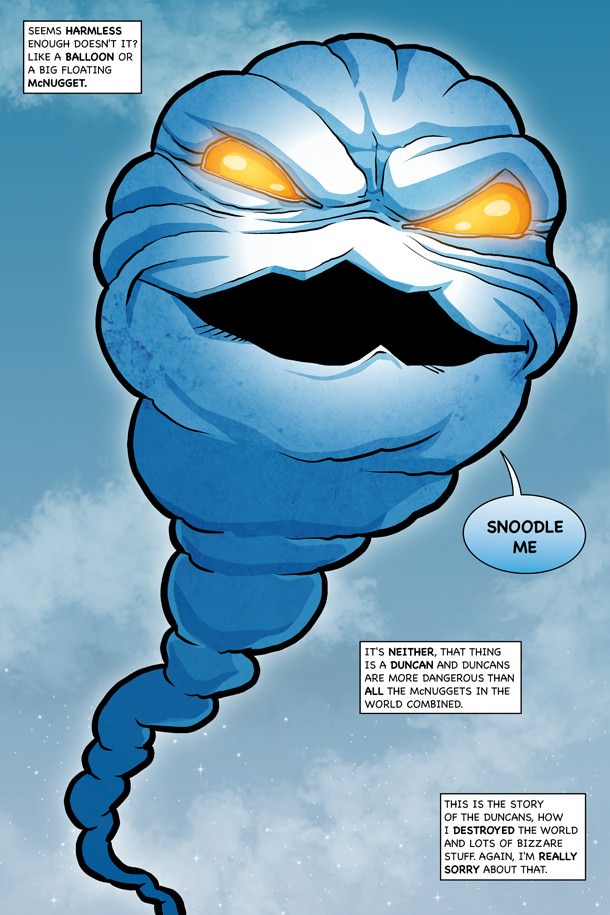 There’s another comic called The Warden, which is a really interesting take on the superhero genre.  Basically the warden is the
world’s greatest superhero, but in fact he’s just a prison containing the world’s greatest villain.

Attica is a Greek mythology thing set in the present day where Castor and Pollux have been imprisoned for thousands of years and they’ve come out completely reformed. Gone  are their days of raping and pillaging, and they’re relatively friendly to an annoying degree.

We publish Robert Rankin’s comic called Empires, which is a thing set in the nineteenth century with monkey butlers and robots and all kinds of steampunk fun. I think it’s basically a way for him to draw his wife in a gas mask a lot. We are re-publishing all of the Red Star, from the beginning, which is Christian Gossett’s book, which has been around for quite a long time.

And at Square Planet Comics, our main focus has been publishing Blastosaurus, a story about a dinosaur who fights crime with a gun. Of course, fighting crime isn’t easy if you’re a dinosaur with a gun because a) he doesn’t know how to use it, he’s a dinosaur; b) he can’t go undercover, he can’t fit in a standard police car, he has to wear specially altered pants, so he ends up being relegated to big publicity campaigns like the safe-sex-o-saurus promotion.  To use common terminology, he’s basically disabled in terms of functioning as a normal person, but he’s a dinosaur. Yes, it turns out his superpower is a disability. But it’s an ongoing series. It started out as a way to subvert that mutantreptile genre of extreme dinosaurs and terrible thunder lizards and dino-riders and dino-saucers and ninja turtles. Obviously, they have been a huge influence on me. I’m telling it in a much more grown up way I think. It’s a really dense, multi-layered story where there happens to be a dinosaur with a gun in this world and it’s not that fun. The result is that other cities start introducing other mascots like Rhinofficer, a rhinoceros who wears a policeman’s helmet for some reason. We’ve been doing that for a few years. It was published through an American Original but things went a little bit wrong. I can’t say too much about it, but I own the rights again finally, so I’m publishing it again myself. We’re doing convention specials, and we’ve relaunched the website.

Five days a week we have I fight crime, our comic strip about two guys who work in a comic shop where there are monsters and a bear for some reason. One or two days a week, depending on how quickly we recover from a recent burglary, we’ll be publishing Blastosaurus right from issue one as a full colour comic. We’d like to do it two days a week so we can have seven days of content.

This is my tenth convention of the year so far.

It’s a tiring life. I do comics all day long, that’s what I do.

Your team is based all around the world.

Yes. With Beyond Reality Media, Bill Geradts and I, who co-write the Duncan story, and also another story coming up later called
The Darwin Fairies. It’s a retelling of the life of Charles Darwin if there were a group of vengeful fairies trying to take him out.

We’re both based in New Zealand. Christain Gossett the other writer on Red Star, Warden and Attica, is in LA. Robert Rankin is in England. Our artist, Gonzalo Martinez, our colourist Juan Moraga, are both in Chile. As is Alan Robinson, who’s also in Chile. We have Darick Robertson, who is famous for doing Transmetropolitan and the Boys. He’s the first artist on Attica and later on we have his finishing artist, Richard Clarke, and he did incredible work. But everyone from Blastosaurus.com is New Zealand-based. I draw the comics. My friend Terry and I write the comics together and my wife draws I fight crime. So yeah, it’s this big international thing that thank god skype exists.

Absolutely. It sounds fantastic. You’ve got a whole heap of fans waiting to talk to you. Thank you for talking to Dark Matter.