Patent-leather ankle-breaker boots walk down the stairs revealing… Cat Woman. Her companion is Bat Woman? They kiss. They’re an item!

Bat Woman parties on while Cat Woman returns home because she has an early shift. Alone under the underpass a stranger attacks Cat Woman, stabs her in the stomach. He shushes her as she lies there, bleeding out.

I’m not sure when the average viewer sees who’s who but in the next scene I realise Julie (Céline Sallette) is Cat Woman. I’m still not sure who the stabby man is although his face has been shown fairly close up. From other things that happen later this zode, I suspect — but I’m not sure — that the stabby man is unknown to us as viewers.

Fast forward into the present, Julie is attending Mr Costa’s funeral. Remember him? He’s the old guy whose daughter returned so he tied her up (HOW?), burnt his house down with her in it and jumped off the dam in episode 1. The dam that is now mysteriously losing water.

FYI in the opening credits there are lots of animals’ corpses floating in the water. It’d be interesting if the only reason for the water levels dropping was that they were coming back to life and hopping out of the bathtub, Eureka!

Adèle (Clotilde Hesme) is convinced she’s mentally ill and talks to her priest, Père Jean-François (Jérôme Kircher). He suggests she welcomes Simon and makes her peace with his ghost, never believing that he’s substantial. Adèle takes his advice. This story thread is interesting because of the previous diagnosis of mental illness and how no one, not even Adèle, considers that Simon may be physically present.

The flip side of Adèle’s story is that her new partner, Thomas (Samir Guesmi) is stalking her via CCTV in her house, outside her house and in public spaces. This is so very creepy.

Some people thrive on others misfortune: Julie’s nasty neighbor Madmoiselle Payet (Carole Franck) disrespects the funeral to tell Julie about Lucy getting stabbed in the underpass. Julie nearly vomits on the spot and runs away. Payet continues to harangue and bully Julie at every opportunity, including threatening to inform on her as if she’s in Staziland.

Lena (Jenna Thiam) and Camille (Yara Pilartz) are sparring, circling like wary cats. Both say they’ve lost a sister; both assertions are poignant.

The water level in the damn where Mr Costa jumped to his death is falling. Every day it falls 2 meters.

I haven’t seen half this much smoking on TV for decades; the only exceptions have been DS9‘s trip back through time to WWII and old movies.

Just in case we forgot about Julie’s scars, we see them again.

The gendarme (police) inspector is Julie’s ex-, Bat Woman, who didn’t bother visiting once in 7 years. So, when she shows up to ask questions, Julie shuts the door in her face.

Camille may be developing strange tastes. There’s a half-eaten corpse of something in the kitchen bin attracting flies.

Julie arrives home to find Victor missing. Key spoilery scenes follow of which I will say NOTHING. Until the next episode’s review.

Julie is really interesting: seven years ago she wore a sexy cat woman costume but now she wears baggy clothes and trainers and no makeup. She’s frightened out in public, hypervigilant and hiding, like so many real-life victims of violent crime.

Secrets and lies. During my studies at RMIT, lecturers stressed that ‘people never say what they mean’ or they hide the truth. The Returned is one of the few times this really works for me: the secrets, the unspoken truths, the misunderstandings, are all a reflection of human nature. All seem to reflect legitimate character motivations. Although it’s definitely getting more Supernatural and I don’t have my peanut gallery friends supporting me, I am enjoying this series. 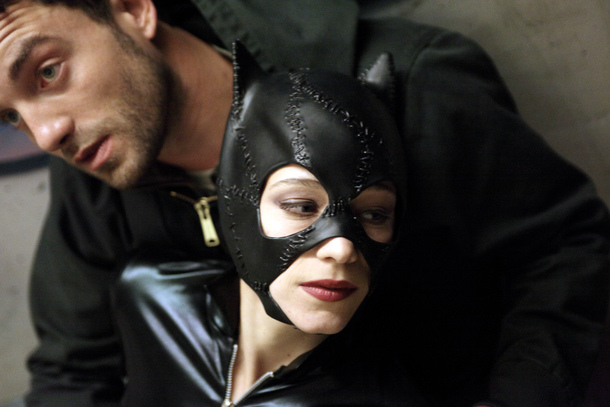