An alien spaceship crashes on Earth. The alien kills a human and shape-shifts to take his place while searching for missing equipment, becoming a resident alien. While also searching for his human victim’s body before humans find it. Then the local doctor is murdered so the mayor asks the alien, whose name is now Doctor Harry Vanderspeigle (Alan Tudyk), to take the dead doctor’s place as town doctor.

Then Harry discovers Max Hawthorne (Judah Prehn) has a genetic anomaly that allows him to see through Harry’s human disguise. As Max is a precocious child, hilarity ensues.

Resident Alien is probably the most diverse TV series or movie I’ve seen in a while. Harry (Alan Tudyk) is obviously white, as are the mayor Ben Hawthorne (Levi Fiehler), his wife Kate (Meredith Garretson) and their son Max. However, the sheriff Mike Thompson (Corey Reynolds) is Black – and keeps trying to get people to call him “Big Black”.

Asta Twelvetrees (Sara Tomko) and her father Dan Twelvetrees (Gary Farmer) are Native American as are a few less frequently-appearing characters. Plus Asta and Harry visit the reservation.

Then there’s Max’s new/best friend Sahar (Gracelyn Awad Rinke), a scarf-wearing Muslim. She’s the comedic sidekick as is often the case with marginalized representation but she’s also the brains of the pair. Her delivery of lines is brilliant; I look forward to watching her future appearances and hope she lands many similar roles as well as leading roles.

Asha and Harry also work with Nurse Ellen (Asian Canadian Diana Bang), a nurse whose role appears to be part gopher and part Abby Sciuto (NCIS Goth-girl) line delivery. To be honest, Sahar does it better but I enjoy Ellen’s banter too.

There are a couple of characters with disabilities. The sheriff’s father keeps an oxygen tank with him at all times. No one comments on this. Also a Native American woman is bedridden until the doctor treats her, which is an excuse to put the Native American cast in context of home and family life.

Pop culture references abound. From Harry’s fairly consistent speech mannerisms and fairly literal interpretations reflecting the aliens in Galaxy Quest to in-your-face references to Cheers by use of the theme song with appropriate visuals. And American Werewolf in London references over several episodes! There are more. While the references add flavor to the stories, enjoyment comes from the broader stories. Although it’s not necessary to make these connections, the trivia-minded will enjoy identifying them all.

Resident Alien is unexpected, hilarious, quirky, it’s all the shiny things. I absolutely loved the first half of the season then it got even better when Linda Hamilton (Sarah Connor in Terminator) shows up. The pop culture references add spice while the murder investigation progresses despite the bungling sheriff’s overbearing attitude towards his more competent deputy. When we finally learn “whodunnit”, I was surprised. And hubby was confused!

My only criticism: THERE IS NO AUDIODESCRIPTION. Grr argh. Get your act together! Otherwise, Resident Alien deserves the highest rating possible.

Resident Alien is The Nancys but set in America and with an actual off-planet alien. 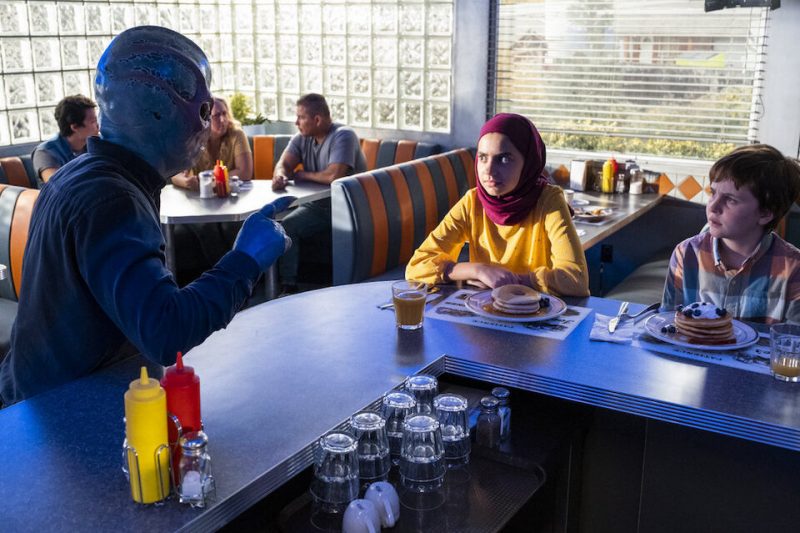