A spoilery review. You have been warned.

Regression begins with a note on screen stating that this story is inspired by true events. In other words, Regression is fiction based upon an inspirational grain of sand. This is so common that making this statement is superfluous and it confuses viewers into believing the movie is based on real events.

John Gray (David Dencik), Angela’s father, says she never lies but that he can’t remember doing any of the things of which she’s accused him.

Professor Kenneth Raines (David Thewlis) is brought in as a specialist; he hypnotises Gray and several other people.

What follows is an appalling story that tries to both be a modern-day Crucible (it’s even set in Salem!) and a supernatural horror story, failing on both counts.

Much as I like David Thewlis (Professor Lupin, anyone?) I loath Kenneth Raines as the hypnotist. He’s incompetent, leading subjects in such a way as to implant memories in the susceptible. His conflation of investigation and therapy is appalling.

I question whether police procedures would allow such rank stupidity but it’s America and the Gray family is from the impoverished underclass so that even their minister dislikes them. Shallow prejudice rules the day and a witch hunt begins.

The supernatural scenes during what was obviously intended to be a new Crucible were ridiculous. Instead of “I’ve had no breakfast” I was in danger of losing my breakfast. Not because the scenes were fabulous horror but because the movie gave me the shits. Regression inspired the OFF button but I relented, I turned it back on to fast forward to the end to see if my initial prediction made within the first few minutes of starting to watch Regression was right. It was. Yawn.

Apart from the obvious sensational supernatural Crucible story (argh) the worst part of Regression is Hermione Granger facing Professor Lupin across a desk, both in similar roles with the same body language, intonation etcetera. Did no one think this through?

Regression is a silly but predictable story that flouts reasonable police and psychology/counselling procedures while trying to merge supernatural horror with a real-world story. The supernatural horror scenes are both padding and misdirection but only for the most naive audience members. As is often the case in unsuccessful movies, the writer and director are the same person. Avoid. 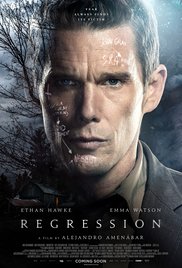