The lewts received recently. With cats. With cats competing for the limelight, no less. 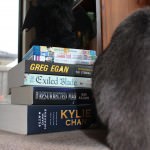 Smokey photobombs Edgar with the books and blurays 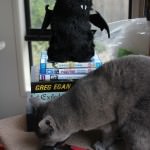 Smokey is NOT IMPRESSED at not being the centre of attention 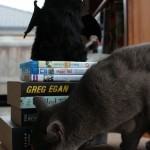 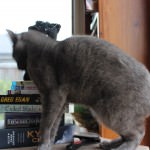 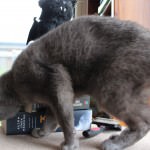 I guess putting her scent on the loot takes higher priority. Is this a cat’s version of a pissing contest? 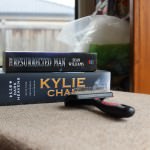 This is a spectacular, creative romance standing head and shoulders above Hollywood’s remakes of Romeo and Juliet because of its incredible world-building and beautiful art.

My review will be published this week.

In a universe that is not our own, two worlds with inverted gravity dangle within a few metres of each other. The one above is very wealthy. The one below is desperately poor. The people of the two worlds are forbidden to interact, even though they can see each other…

Adam lives humbly “down below” trying to make ends meet, but his romantic spirit holds on to the memory of a girl he met once upon a time from the other, affluent world, a girl named Eden. Their childhood flirtation becomes an impossible love. But when he catches a glimpse of grown‐up Eve on television, nothing will get in the way of getting her back.

The Eternal Flame by Greg Egan

Sequel to The Clockwork Rocket reviewed by Rebecca Muir, this is the second part of a much-admired work by Greg Egan. Rebecca was obviously excited to continue reading this story as she reminded me when she didn’t receive the sequel.

I only gave the original to Rebecca to read because of her engineering background: the physics completely threw me. Rebecca assured me that the physics is part of the fiction of this novel, so all is good. Her reward: she gets to read this awesome science fiction work with feminist themes. While I miss out.

The generation ship the ‘Peerless’ is suffering from a population explosion and the only way to reduce the number of children is by drastically limiting the females’ food intake, which will trigger a natural response to famine and stop procreation. So population control consists of two barbaric choices: starvation, or suicide.

Trying to find a better way, a biologist starts experimenting with animals and stumbles on a technique that radically alters the reproductive cycle. But while the advantages are obvious, there’s a major drawback: while it spares women from their old role – reproduction without hope of survival – it will essentially wipe out an entire sex.

Amid the turmoil created by this new possibility, physicists on the ship are working to develop the technology they will need to complete the mission of the ‘Peerless’. The people who brought the ship onto its present orthogonal trajectory used up so much fuel that there is no hope of returning – unless they can use what little remains far more efficiently. One of the expedition’s founders dreamed of discovering the Eternal Flame: a way to generate thrust without consuming any fuel at all.

The inhabitants on board the ‘Peerless’ have some hard choices to make – and the wrong one could spell extinction for their entire race!

This is the third and final installment of the Assassini trilogy set in Medieval Venice featuring werewolves and vampires.

I’ve really enjoyed Fallen Blade and Outcast Blade so I’m looking forward to the final act of this story.

The concluding volume in this gripping fantasy series about ambition, revenge and the rise of a vampire assassin – from a critically acclaimed British author.

Venice stands victorious. It has beaten back the German emperor’s army and the Byzantine navy. The Duchess Alexa’s party at court is strong again. Her niece, Lady Giulietta, will be the next Regent, and possibly the next duchess. Giulietta’s lover, Lord Tycho, will sit beside her.

With the Millioni family at war with itself, Lord Tycho, once a slave and a trained assassin, has to ask himself the only question that matters. How much is he prepared to sacrifice to keep Lady Giulietta’s city safe?

Another sequel for Rebecca to review; Rebecca enjoyed Creative Fire, the first book.

Pyr (the publisher) says: What if a woman as strong and as complex as Eva Perón began her life as a robot repair assistant threatened by a powerful peacekeeping force that wants to take all she has from her?

The discovery ship, Creative Fire, is on its way home from a multigenerational journey.  But home is nothing like the crew expected.  They have been gone for generations, and the system they return to is home to technologies and riches beyond their wildest dreams.  But they are immediately oppressed and relegated to the lowest status imaginable, barely able to interact with the technologies and people of the star station where they dock, the Diamond Deep.

Ruby Martin and her partner, Joel North, must find a way to learn what they need to know and to become more than they have ever been if they are to find a way to save their people.

The Resurrected Man by Sean Williams

A close look at the cat fight in the photo gallery above will possibly reveal that the cover pictured is different to the cover I received, but that’s ok. MY cover comes with a title page that was AUTOGRAPHED.

A search on HarperCollins’ website yields a result that doesn’t actually link to the page for this novel.  However, a search on Sean’s website reveals an actual, real-live page.

The year is 2069.  D-mat offers fast, cheap travel, plus the potential to turn humanity into a race of godlike starfarers.  But new technology has a dark side: d-mat allows a killer to perpetrate a series of vicious attacks without leaving a victim.  Detective Marylin Blaylock is on the case … a case where the murdered women all resembleher.

Jonah McEwen, a P.I. and Blaylock’s ex-partner, is the prime suspect.  But Jonah’s alibi is watertight.  He’s been in a tub of maintenance gel, unconscious for three years.  Yet, in a bizarre twist, he could still be guilty.

“An Australian award-winning F/SF author strikes new sparks from an old flint: What if matter transmitters (“Beam me up, Scotty”) really worked?…Convincingly realized… with the vigorous narrative whizzing along at hyperspeed.” (Kirkus)

This is a re-release of Kylie’s first three novels in one bumper volume. I’m lucky because I just read Small Shen and loved it. Now I’ll read her first three novels, review them AND use them for source material for my Archetypes essay and oral presentation on contemporary Australian fantasy with Asian influences: TWO FOR ONE! YAY!

Martial arts, gods and demons – find out how it all began with the complete trilogy of Kylie Chan′s bestselling series.

Emma Donahoe has just started her job as nanny to Simone, the daughter of rich businessman John Chen. She knows that Simone may be a target for kidnappers but she has no idea of just how dangerous her new job could be. Soon she is drawn into a world of martial arts, magic and extreme danger … And the mysterious John Chen seems to be more than just a businessman.

Get set to be drawn into a fast-paced world of action as Emma learns about martial arts, discovers her own secret abilities, fights demons, and falls in love with a 3000-year-old Chinese god.

From up on Poppy Hill

Set in Yokohama, From Up On Poppy Hill is a high school love story that take place in the year before the 1964 Tokyo Summer Olympics. As the country begins to pick itself up from the devastation of the Second World War, the new generation struggles to move towards a prosperous future whilst trying not to lose the essence of their past. The film’s rich and vibrant animation captures the entrancing beauty of Yokohama’s harbour and lush surrounding hillsides and, with a soundtrack that draws inspiration from the finest music of the time, perfectly captures the thrills of young romance and the hope of a new dawn. This lovingly hand-drawn film centers on Umi (voiced by Sarah Bolger) and Shun (voiced by Anton Yelchin) and the budding romance that develops as they join forces to save their high school’s ramshackle clubhouse from demolition.

Studying Writing and Editing at university, I just couldn’t pass this one up for review. I mean: BBC and Arthur Daly from Minder on writer’s block with NO laugh track? Win!

Writer’s block shouldn’t be this funny!

Gordon Maple is a successful playwright with a complex problem: wracked with self-doubt and stricken with the dreaded “block” at times, he believes he’ll never work again. Stricken by frustration and mounting angst, he struggles to work through the problems of the everyday and the imaginary with the help of his ever-supportive wife, Mabel.

Of course, it doesn’t help when your suave and urbane neighbour is the considerably more successful playwright Tom Lawrence, friend by day and distraction by night. Lurching between the desperate need for the solitude of the agonised writer, and the drive to surround himself with people from which he can glean inspiration, Gordon Maple is a victim of procrastination, fear of opening nights, the drying up of his creative talents, and the inevitable blank page that awaits him.

With all the distractions of life on and off the page, Gordon Maple needs to be reminded of the most important thing in his life: “Don’t Forget To Write”.