A spoilery review. You have been warned.

Amani prepares to run away from home. Her uncle — her mother’s sister’s husband — has decided to add Amani to his collection of wives. Amani disguises herself and enters a competition to win money to help her run away to her other aunt in the big city. The competition is rigged, the house always wins. And if the house doesn’t win, thugs mug the winner to recoup losses.

Amani and Jin, a handsome stranger, throw the competition to save a life but the bully who shoots for the house decides to shoot Jin anyway. Jin and Amani start a riot. Jin helps Amani escape the burning building.

She returns home to work in the shop, ensnare a magical horse her uncle claims as her guardian and then Jin rescues her while riding the magical horse. That’s when their adventures really begin.

I grew up with stories of Arabian nights and Sea Green Magic. (Wow, that book was old when I read it through the Scholastic program! And I had no idea the Wombles’ creator wrote that novel.) I opened Rebel of the Sands with expectations of absolutely loving the story but its inconsistencies and plot-holes frustrated me.

Early on, Amani tells the reader repeatedly that her eyes are the pale blue of the foreign occupying force so her mother must have slept with one of the invaders then passed her off as her father’s daughter. Later it’s revealed Amani’s eyes are an inhuman glowing royal blue; apparently they always were this colour, even with the iron in the atmosphere that made Amani purely human, but Amani didn’t notice.

Creepy teenager threatens to reveal Amani was at the shooting competition because he saw her blue eyes between her headscarf and her face covering. There’s a man in town with exactly the same colour eyes. Amani is very impressed by this man with the same colour eyes who could have legally attended the shooting but she doesn’t mention him to defend herself.

As part of her disguise, Amani cuts her hair to look like a boy. At the shooting competition her face covering is left on but her headcovering is pulled off so they see her boyish haircut and don’t realise she’s a woman. However, when she returns home, no one comments on her ragged boyish haircut and there are several mentions of her long hair.

A shapechanger becomes a roc, a large bird. In one dive, he takes out the side of a train carriage. In the next chapter it becomes the sides and ends of two train carriages so friends see each other through the ends of the carriages and, from both carriages, they jump off the train together.

A half-djinni performs magic while carrying a gun although full djinni are unmagicked by a human touching iron to their skin.

Rebel of the Sands cover is beautiful with its embossed border surrounding an image of the desert at night, evoking images of A Thousand and One Arabian Nights. The story is a wild ride in a magic-filled Arabian world with over-the-top action and adventure, relying so much on coincidence and an unreliable narrator that it’s almost a comedy. There’s a fair bit of “because PLOT”. Characters are shallow and predictable: the prince in disguise seeks to capture the beautiful half-djinni, a person finds a painting on a canyon wall and knows — without being told — that it’s a magical door to sanctuary. I’ve only read the first novel but I predict a “happy ever after” romance too. I recommend Rebel of the Sands to readers who want a wild magical ride through Arabian Nights. 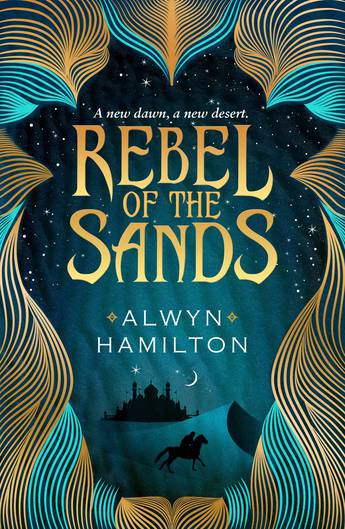