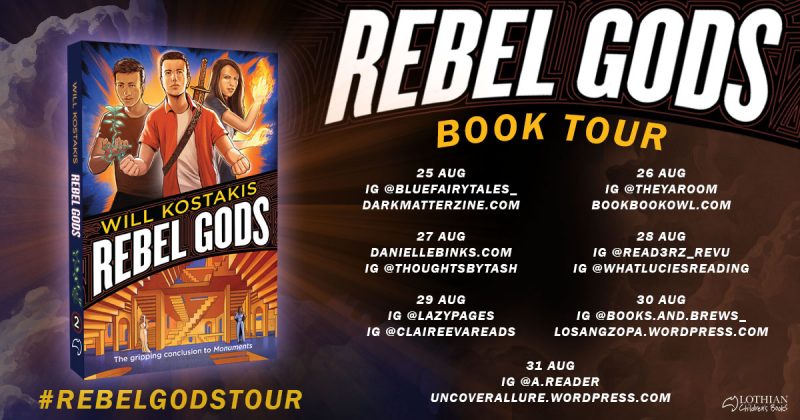 Rebel Gods is Monuments book 2 and the conclusion to this story about the Pillars of the World coming to life, fighting it out with their errant children, and trying to protect the world. Throw in a gay romance, an orphaned teenager, time travel and superpowered humans and you have this Young Adult escapist read.

If you haven’t read book 1, I recommend reading my review of book 1 and do not read ahead. Ahead are spoilers for book 1. You have been warned!

Connor (a gay Greek), Sally (the orphaned teen living in her van) and Locky (the other half of Cocky? Lonor?) are coming to terms with their new super-powers. They’re practicing their superpowers while investigating, looking for the rebel gods who tried to destroy the world before and probably will again.

And they’re trying to decide if murdering someone at first sight is a good idea. As you do.

But how do you investigate the rebel gods Love and Fear when you’re part human so they can influence you?

An ode to Labyrinth

Rebel Gods‘s cover implies this novel is an ode to Labyrinth, the iconic movie starring that iconic Queer David Bowie. There is, indeed, a labyrinth in the novel. No Goblin King but the rebel gods Love and Fear live there…

In this podcast, Will Kostakis talks about how we need more books that focus on Queer “butterflies”, people who are out and living their best lives, instead of the traumatic cocoon stage. Kostakis writes “butterflies”, celebrations of queerness. I’ve interviewed Will a few times now so you can listen to him from 2016 or read an abbreviated interview where Will talks about representation.

Connor and Locky are out and proud and very much in love. They fell in love in book 1.

Connor struggles in school because he had 4 years out of school and didn’t bother keeping up or preparing to return. Bibliotherapy takes many forms and this can be a lesson for those who don’t want to struggle in school during and after the pandemic. How prescient!

Monuments involved an epic time travel adventure that I was *sure* incorporated an epic hole BUT I WAS WRONG. Kostakis ventured into superhero teenagers time travelling with meticulous attention to detail. Romance! Ethics! To murder or not to murder! Rainbow colored lawn for a homophobic fundraiser! Rebel Gods has it all.

My only quibble is the ending. It’s a half-cliffhanger in that there isn’t a sequel so you effectively write your own end-of-the-ending. Normally I’d say “I see what you did there” but, during these unprecedented times, I WANT MY FULL DOSE OF CHEESE AND HAPPY ENDINGS, KTHKSBAI.

I highly recommend Monuments and Rebel Gods as a Young Adult gay romance adventure with superheroes.

After I scheduled this review, the wonderful people at Hachette sent the blog tour schedule through for inclusion. Apologies I’m adding this late: my apparently never-ending computer problems caused a literal headache yesterday so I was lying down in a dark room in an attempt to sleep it off. No exaggeration. Hopefully someday soon I will either have disability access and a working computer or I will develop workarounds. 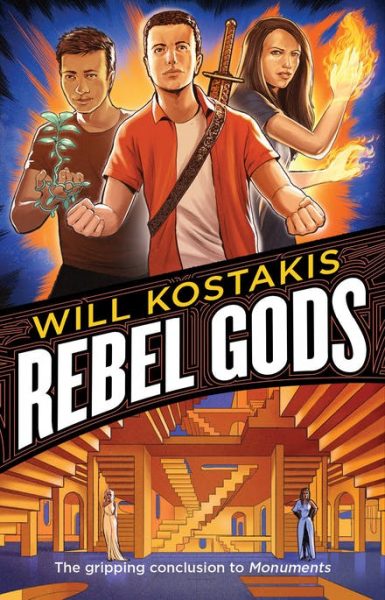