To read my reviews in order, to see my initial enthusiasm be replaced with increasing snark, check out all my Shannara Chronicles reviews here. My policy is not to repeat myself except to tell you that I won’t repeat myself, so go to episode 1 for the context and initial naive exuberance.

By ‘Reaper’, episode 5, the Shannara Chronicles has become a cheese pizza with a cheesy crust topped with three kinds of cheese. That works when characters are engaging or comedy comes to the fore but, by episode 5, this series harkens more to soapies than fun superhero movies like Hellboy. (See previous reviews for context.)

To add to the soapie-like melodrama, we see flashbacks. Ander’s sexytimes partner, Commander Tilton (Emilia Burns), discarded him over for his older brother, Arion, now the heir apparent. You’d almost think it was a setup to snag the throne for the grasping unlikable Arion. I wish it was something so Machiavellian, so much like the Borgias, but no. It’s just lurv gone wrong. Swap one brother for t’other because that’s how this family rolls.

Wil and Amberle confront a demon reminiscent of the Lich King in World of Warcraft. I thought he was a combination of the Balrog and the Witch King from the Lord of the Rings.

Speaking of which, have I mentioned how Arborlon reminds me of Minas Tirith, the White City? Specifically, the promenade in front of the entrance, which also reminds me of the inn at Telaar in Nagrand (World of Warcraft; WoW prides itself on references to other science fiction and fantasy franchises rather than originality in design.)

In the opening credits, imagery conveys information about this new world. Human blood trickles down the screen and forks at points to reveal first gnomes then dwarves then trolls. (Not Elves because they were always here, in hiding; they merely emerged after the apocalypse. I expect we’ll learn that later.)

Dwarfs — otherwise known as people of short stature or people with dwarfism — are real; see Peter Dinklage for an epic person of short stature. It’s offensive that they’re placed below gnomes in the humanoid family tree. Furthermore, gnomes look like they’ve stepped straight out of the Mos Eisley Cantina, a blend of two aliens at the bar. In contrast, Peter Dinklage is climbing the sexy-man charts. The Shannara Chronicles appears hell-bent on undermining what Game of Thrones has achieved. Am disappointed.

The Shannara Chronicles roll onwards, ever closer to the end of the story. Thank God. Bored now. 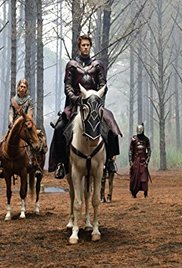