On a cold winter’s evening – July 8 to be exact – at the close of the Guardians of the Galaxy 17 minute preview I rushed out of IMAX at about 6 pm to walk briskly up to Readings for the 6:30 pm launch of Razorhurst by Justine Larbalestier.

Justine entertained attendees with discussion of how her clothing relates to her characters. Grateful for a question about her boots, Justine flashed her custom-mades at us with a few pithy comments about the fitting process. Afterwards, Justine waved books – some of her inspirations – at us, taking particular care to walk us through a photographic journal that served as inspiration for quite a few characters.

Award-winning international-bestselling author Jay Kristoff loomed over proceedings as is his want. Jay’s ‘secret agent kung-fu assassin wife’ rejoined our chat from circulating the room once Doctor Who somehow became a feature of the conversation. Other ‘persons of interest’ in attendance included Adele Welsh, Program Coordinator for the Centre for Youth Literature at the State Library of Victoria. There were a few other people sharing photos on  Twitter after the event who I didn’t recognise on the day  but maybe next time. Maybe next time they’ll know the nearly-6-foot-tall blonde in the black fedora is MEEEEE and they’ll come and say ‘HI!’

Video of Readings Bookstore launching Razorhurst is below the photos (quicklink here). Click on any thumbnail to open the photo gallery carousel; use left or right arrow keys to scroll through the carousel and the escape key to exist.

Allen & Unwin published Razorhurst, which is available in paper and electronic formats. 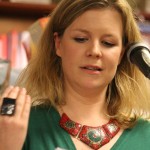 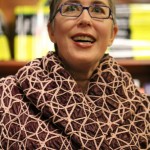 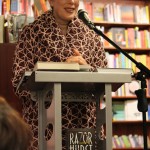 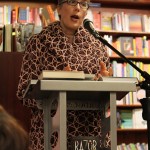 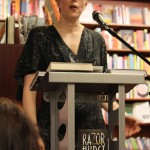 Having shed her outer skin, Justine looks quite conservative in comparison…

Except for her boots. These custom-made books feature Justine’s family crest. 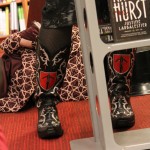 The boots coordinating with Razorhurst’s book cover is completely coincidental. 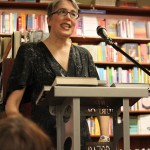 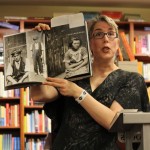 Justine displaying one of the books that inspired her 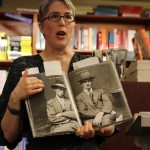 The cold, dead eyes of a killer – a cliche? Not so much. 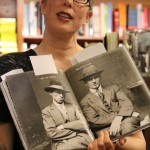 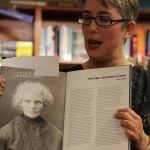 “And this is when I started thinking of ghosts”