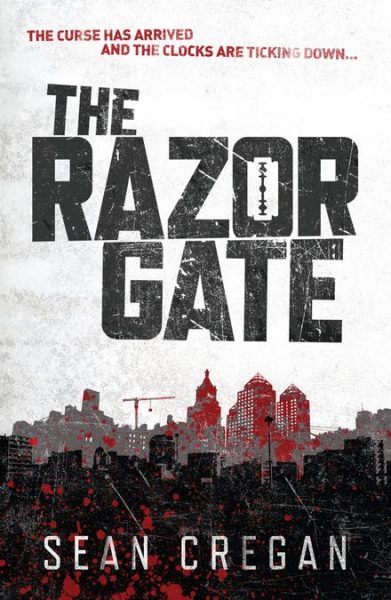 The Razor Gate begins when Maya, daughter of a refugee and US citizen, a journalist whose career is in shreds after a libel suit, witnesses a bombing on Green Street. Garrett is a cop who was busted down to the streets after becoming personally involved with a victim of a crime. Emi, the victim, has been effectively murdered – given a year to live. Emi isn’t alone, there are well over a hundred others like her, called Clocks because their time is running out. The police force is crooked, dancing to the tune of the suits watching like vultures.

Maya’s history of living with her father in a refugee camp equipped her with skills to function in the refugee district that others didn’t have. However, Maya didn’t appear to have any connection to people in the refugee camp at the time of the story, even though most refugees never managed to leave the camp.

Garrett had been sitting in on support groups for the Clocks until he was busted down to the streets for getting involved with a Clock and pushing the investigation too far. Garrett’s mother had cancer, lending added impetus to his relationship with Emi and his determination to find a cure. Garrett’s grief is a running theme in the story, as is his internal conflict, tearing him between staying with Emi and seeking a cure to save her.

Emi, an artist, spends her time drawing and painting and trying to fill her last year with as much living as possible. Even so, her grief at her impending death is overwhelming. She clings to Garrett and to life.

In the beginning Cregan sets the tone, ‘The business suit is the SS uniform of the modern world.’ Just before the climactic resolution of the story philosophical and ethical issues are raised, presented as an argument between opposing sides. I would like to have seen more of this woven throughout the story.

The Razor Gate is a crime/thriller with an SF premise (the manner of the murders) bracketed with moral and philosophical exploration, of which I wanted more. 3 out of 5 stars from me, but those who really enjoy action oriented crime/thrillers will probably rate this book higher.

Sean Creagan is a pseudonym for John Rickards.