a review by Evie Kendal

JR Ward’s Rapture is part of the Fallen Angels series, a spin-off from the Black Dagger Brotherhood (BDB) series; there are various characters and events that overlap between the two. The general premise of the series is that the fate of all humanity rests on seven contested souls. These souls are afflicted by one of the seven deadly sins and each individual is about to hit a crossroads in their life where they will have to choose good or evil. Whichever side wins the balance of these souls determines where all human souls will spend eternity.

In the first instalment, Covet, Jim Heron becomes a fallen angel and is charged with the role of influencing the seven individuals in question. Chosen for his equal good and bad attributes, both sides agreed upon Heron as an appropriate intermediary. However, while Heron is supposed to stand alone in this contest, the representatives of Heaven (depicted very much like an English gentleman’s club) send him two other fallen angels, Eddie and Adrian, to assist him. All three are leather-clad, motorcycle-riding, foul-mouthed, violent misfits, who over the course of the first novel learn to work together to save Vin Di Pietro from giving in to his selfishness and greed.

It is not just the good guys that “bend” the rules of the game though, as Devina (quite literally the devil in the blue dress) already knows who each of the contested souls is, and has worked for years insinuating her evilness into their lives. In the case of Di Pietro, she has been in a romantic relationship with him for years, encouraging his covetous attitudes. On observing Heron’s behaviour toward the target, Devina decides he is not the neutral player she had hoped for, but rather favours the side of good. As such, she decides to play a very active role in the fight over each soul, despite the fact this was forbidden by the Creator.

As a paranormal romance series, it comes as no surprise that finding “true love” is the turning point that makes Di Pietro change his behaviour. His love interest, Marie-Therese, is already known to fans of Ward as the friend of a murdered prostitute in the Black Dagger Brotherhood series. Other characters and recognisable objects from BDB appear throughout the Fallen Angels series, but are mostly subtle hints suggesting a more in-depth crossover narrative in the future. Catholic tradition permeates both these series, but is more central to Fallen Angels. However, Ward’s writing makes the plot accessible to people who do not have previous knowledge of Catholic dogma and provides its own basic catechism for readers so they can follow the significance of the religious symbolism used.

Throughout Covet the reader discovers that Heron is a former assassin, trying to escape his past and particularly his XOps boss, Matthias, a malevolent killer. Unfortunately, at one stage in the story Heron must ask for Matthias’ help in tracking down someone and ends up owing him a favour, which sets the scene for book two.

It is not possible to summarise any more of the series without giving away major spoilers as the ending of the second novel, Crave, sets in motion everything that follows. In this novel, Heron discovers Matthias expects him to kill his former comrade, Isaac Rothe. Believing Isaac is the next soul to be swayed, Heron tries to convince him not to go after Matthias in self-defence, knowing this would tip him over to the side of evil. The situation becomes more desperate when Matthias threatens Grier Childe, the defence lawyer Isaac falls in love with in the novel, and confesses he had her brother murdered years ago. It is also in this novel that Devina admits she has fallen for Jim Heron, an opportunity he tries to take advantage of in order to win the battle. Heron himself discovers more of his powers in this book and forms an attachment to Sissy Barten, a young girl Devina murdered as a virgin sacrifice and whose soul is being tortured in Hell.

Given the fact this series is a paranormal romance, and that the souls in question are generally swayed because they find love, one of the first things that intrigued me was how Ward was going to manage to sustain the series for all seven novels. I considered that maybe the series would actually only run four books long, with true love conquering all and the balance being won 4 to 0. However, in a masterful stroke, Ward manages to have the bad side win a point in Crave without violating the requirement for a happily-ever-after for the love interests. After Heron succeeds in swaying Isaac, all that remains is for him to confront Matthias and protect Grier’s family. However, at this point Heron realises he has made a major mistake, as the soul arriving at the crossroads was not Isaac’s, but Matthias’. Although Isaac and Grier do get their happy resolution, Matthias chooses evil and following his death is drawn into Devina’s well of tortured souls.

The third book, Envy, details Heron’s fury, not only that he lost the last round, but also that Devina is torturing “his” Sissy. There are a few tragic losses in this book, but overall this book chalks another win to the good guys as Detective Thomas Del Vecchio abandons his homicidal nature in order to be with Sophia Reilly, his internal affairs officer. The murder being investigated in this novel is also an important one in the BDB series, and many of the police officers in the book used to work with Butch O’Neal, the protagonist from Lover Revealed. It is at the end of this novel that petitions to the Creator regarding Devina’s cheating are judged, with the verdict that although the current score (2 to 1) will stand, the round for Matthias’ soul will be played again.

It is with all this background in place that Rapture begins with the resurrection of Matthias in a cemetery outside of Caldwell (the scene for both the Fallen Angels and BDB series). At this point Devina knows he is the next soul to be fought over, however Heron is completely unaware and has only received the hint that the next soul will be from a former enemy.

The first thing that needs to be said about Rapture book four of J. R. Ward’s Fallen Angels series is that it absolutely should not be confused with Rapture book four of Lauren Kate’s Fallen Angels series. The latter is intended for a young adult audience, the former very much for adults. There is a lot of physical and sexual violence in Ward’s series that makes it unsuitable for a young audience. I found the name of this book unusual, not only because of this potentially confusing overlap, but also as it doesn’t follow the naming convention of the previous instalments, all named after one of the deadly sins.

Rapture follows the story of journalist, Mels Carmichael, as she searches for answers regarding the disproportionate number of disappearances in Caldwell. Readers familiar with earlier instalments of this series or the BDB series will already be aware of why these missing persons are never found again. At the opening of the book, Mels accidentally runs over a man in her car who she later discovers has lost his memory. His recovery and the developing romance between them are of interest to both sides of the battle between good and evil, and like the other relationships of the series has cosmic consequences. The reader knows the identity of this man from the start (the character mentioned in the spoiler section), which adds another layer of dramatic irony to the story. Without giving too much away, this isn’t the only romance that progresses during this instalment, with several peripheral narratives also developing further.

Compared with the Black Dagger Brotherhood series, the Fallen Angels series isn’t quite as dense and the plots are less varied. However, compared with most other paranormal romance series on the market, it is superbly written and very engaging. Rapture in particular shows how Ward is willing to rise to the challenge of securing sympathy for characters so damaged they might otherwise illicit nothing but fear and loathing from the romance reader. Again I must state though that this series is not suited for younger audiences or the more squeamish of paranormal romance fans. 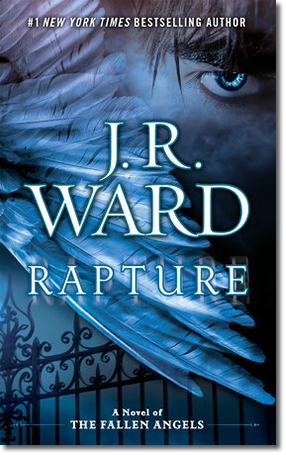