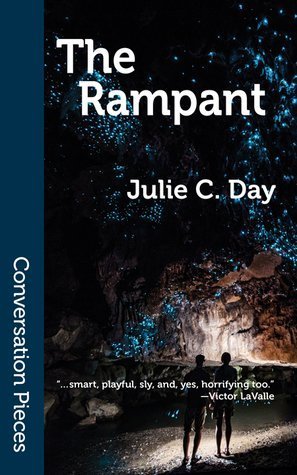 Mel and Gillian live next door to each other in a post-apocalyptic world where the Rapture tried to happen.  6 god-siblings showed but not the full set of seven. Because Rampant was a no-show, the Rapture didn’t happen but the world went to shit anyway.

It turns out Christianity was flawed and Sumerian mythology is real. Cue one extremely fucked up world with monsters roaming the streets, accepting bribes of beer in exchange for allowing potential food (of the human variety) to flee.

Gillian has a crush on her life-long friend Mel (cue LGBT romance) but she hasn’t shared her feelings. Mel wanders the streets at night looking for parts of her father’s corpse so she can give him a full burial. So Gillian’s fears incite her to skip some of Rampant’s dream-lectures that he’s sending so she’ll bring about the Rapture. Gillian goes, she goes, SHE JUST GOES. With Mel. And a half-baked plan. INTO THE JAWS OF HELL. Only, in this religion, THIS IS SUPPOSED TO BE HEAVEN.

The Rampant vs contemporary religion

Rampant is, in my experience, a unique tale twisting the current Christian hunger for the Rapture and the end of the world into a challenge: be careful what you wish for. Interestingly, my brief study of ancient (pre-Greek) mythologies revealed that the Jews incorporated aspects of their captors’ beliefs into their own mythology. And, of course, Jesus was a Jew. Then Christianity took bits of the Jewish faith and doctrines, mashed it up with Roman mythology once Christianity became the state religion. Christianity continued evolving until the late 20th century when it devolved into a prosperity gospel and factions became anti-Muslim. Andrew Denton’s doco ‘God on my side’ exposes the radical religious right and, among other things, their hopes for world war three and nuclear missiles to end the world. Rampant harkening back to a mythology that influenced Jews and pre-dates Christianity is innovative. Especially when it’s coupled with a story about the end of the world. Be careful what you wish for.

Rampant is a visual story with passages periodically focusing on internal musings. As a novella, it’s quite short, much of which is descriptive. The romance felt a little forced with little in terms of character development. But that may just be me, a lover of BOOKS rather than novellas. Rampant feels like a comic book missing the essential ingredient: pictures. I want to see this story in glossy colour, with Sandman-esque artwork, because then it will have legs. And run out of stores.

There’s an app suggesting I link to a review I wrote for a different story. However, the best fit is Anguli Ma: a Gothic Tale. Although Anguli Ma is a real-world story about immigrants in Australia, it has the closest ambience of all the stories I’ve reviewed in the app’s list. Also, if you like Purgatony you will probably enjoy The Rampant.