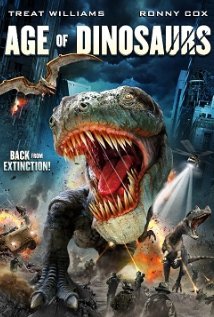 US title: Age of Dinosaurs

Director: Joseph J Lawson
Starring: Treat Williams, Jillian Rose Reed, Ronny Cox
Other notable appearances: Plenty of pissed-off prehistoric puppets
Running time: 88 minutes
Watch this if you liked: The Dinosaur Project or have ever wondered what would have happened if Jurassic Park had a really low budget
Rating:

A biotech company makes the leap from healing burn victims to reconstructing dinosaurs from a single piece of DNA. During the grand unveiling of the 16 dinosaurs (comprised of carnotaurs, ceratosaurs and pteranodons), something goes wrong and the dinosaurs manage to break free from their enclosure.

With the original dinosaurs on the loose and more on their way, it’s up to former Los Angeles firefighter Gabe Jacobs (Williams) to save his daughter Jade (Reed) from the Rage of the Dinosaurs.

Aside from the roaring tyrannosaur on the cover of Rage of the Dinosaurs, what really drew me to it when I was perusing JB Hi Fi’s shelves was the line ‘from the producers of Sharknado’.

[So… the fact that this movie was made by the makers of another REALLY BAD movie attracted you? — Editor]

What totally sold me on the DVD was the back cover though. It asked me ‘are you ready for Die Hard in Jurassic Park?’ I was born ready.

Rage of the Dinosaurs pays homage to its Spielberg predecessor often and does so adequately.

However, one can’t help but wonder if the scientists stupid enough to bring the dinosaurs back to life within the film had bothered to check out Jurassic Park for some dos and don’ts.

[Obviously not. Or maybe the SCRIPTWRITERS did. As in ‘JP did this and make $hitload$.’ — Editor]

The lead female in many B-grade creature features is a badass who can hold her own and usually outlast the fellas. The lead female in Rage of the Dinosaurs left a lot to be desired. Granted, she was portraying a teenage girl. However, teenager or not, I would think if your life is threatened by prehistoric carnivores, you stop fighting with daddy for a few hours or at the very least don’t stomp off in a huff to where there are — what were you running from again? Oh, right. CARNIVOROUS DINOSAURS. Her dialogue wasn’t even particularly witty or quippy, which usually excuses poorly written decisions in these types of films.

Regardless of the female lead’s plot and dialogue failings, the acting was not terrible. No-one is going to win any Oscars but, given the general quality of this genre’s acting, I’m willing to give credit where it is due.

The puppets! That’s right, there were puppets. Believe it or not, they were more realistic than the CGI. Though saying that speaks more to the quality of the CGI than of the puppets. Regardless, they were a lot of fun to watch.

The plot holes were plentiful and so much fun to pick out.

[Aaaaah, like on our Geek Girl Days when we’re the peanut gallery? Maybe I start to get this now. — Editor]

For example, a carnotaurus managed to break through a custom-built clear enclosure that was able to withstand thousands of pounds per square inch (PSI). The same dinosaur could neither break into a glass-fronted fridge Jade climbed into nor break through a chain link fence. You know? The kind of chain link fence that a pair of dull bolt cutters can cut through.

[Doctor Who had a forest that couldn’t be chopped down and was totally flame-proof so why not dinosaurs that are a different kind of fire proof? — Editor]

With all of these points, you may be thinking that this is a terrible movie and not worth your time. You may have gandered at the four-star rating and thought I made a typo. It’s not, I promise.

Rage of the Dinosaurs is a B-grade movie, a fact it makes no effort to hide, and it excels at being an enjoyable, silly and very fun B-grade dinosaur movie. If you like having a chuckle and the thought of rampaging dinosaurs sparks something inside you, then grab the popcorn, settle into your favourite chair and enjoy.