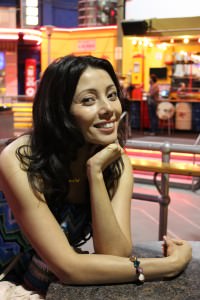 The interview is available in MP4 (video) and MP3 (audio only) formats, both at the bottom of this page.

Rachel Grant was loitering near the OTHER bar, the one that supplied water from a hose (I kid you not! Lockie was the dealer distributing this substance).  I kept looking at this older guy, thinking I should know him from somewhere… every time I came to the ‘in-betweeners’ group, he was there…  I didn’t think he looked like anyone on my list…  AARGH!

Rachel I recognised, and asked for an interview.  She seemed mildly surprised that I sought her out, but she agreed.

Rachel Grant’s website stresses her adventuring, globe-trotting nature so we talked about some of those experiences as well as her screen roles.  Australia is the 40-somethingth country Rachel has visited; she’s impressed with how hard Australians work, with how clean our city is and how laid back we are.  In retrospect I wonder if she also likes not being expected to eat or drink unknown substances on pain of death… [for an explanation, listen to the interview!]

Rachel Grant has been a body double for Angelina Jolie in Tomb Raider, later progressing to Bond girl status in Die Another Day as Peaceful Fountains of Desire.  In between, Rachel starred as the bizarre Nina, the host of Sci-Fright, a genre-movie program.

Below is a picture of Rachel in costume for Sci-Fright, in her favourite costume.  Rachel kindly gave me permission to use this image with the interview.  Rachel described Nina as innocent in a disturbing way.