Roxanne Longstreet Conrad AKA Rachel Caine talks to Nalini Haynes about her career, her Morganville Vampires and Weather Wardens series.  This interview is available in MP4 (video) and MP3 (audio only) at the bottom of this page. 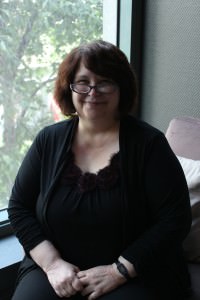 After interviewing Roxanne, I attended her author talk at Dymocks.  Her talk was different to the interview, plus she answered questions from the audience and signed books.  I found Roxanne to be creative, charming, quirky and funny: appealing attributes in a paranormal fantasy author.  While I haven’t read any of her books to date I am now inspired to read her work, especially after several comments she made in the interview. I am intrigued. 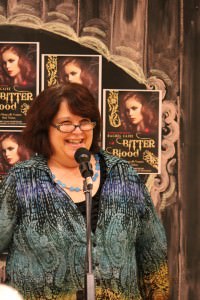 Below are my planned interview points.  Please note:  an interview is an interaction between two people, so plans change.  Questions are modified or asked out of order as it seems appropriate.  These questions are included to give you a taster of the flavour of the interview, they’re not a guaranteed guide to the content.

You’ve had a varied career, starting with a degree in business administration and working as a professional musician.

You worked with John Williams; what was that like?

When did you know you wanted to write?

How did you write with day jobs?

In 2010 you left your job in a multinational company to write full-time; any regrets?

How has this lifestyle change helped your writing?

Over the course of your career, you’ve have a number of pseudonyms

You’ve written a number of series; what are some of the differences and similarities between your series?

Before we go any further, I need to give a big shout out to Denise Pirko who is a huge fan, and who helped me enormously with a lot of the following questions.

Evie Kendal asks about the power balance between love interests in your novels.

What is the difference between writing YA and adult novels and how do you decide which audience you’re writing for?

Other than the Morganville Vampires, you’ve mostly stayed away from the typically done supernatural species/tropes. Was that a conscious decision?

What made you decide to use djinn as supernatural creatures in Weather Warden?

Do you have a love for classic cars and motorcycles that feature so heavily in the Warden novels? Your favourites?

You recently finished the Weather Warden series; what was it like to finish a series after being immersed in it for so long?

With two separate series in the weather warden world will you tell any more stories there?

Denise Pirko says: The idea of being bound to this town in the Morganville series is intriguing and I’ve always loved the involvement of ghosts. How did those come about? It’s not just another vampire story.

Your Morganville series has been optioned for film, television and multimedia by Charles Armitage of Red Dwarf.

You published an original novel for the television show Stargate SG-1 (Sacrifice Moon) under the pseudonym of Julie Fortune; what was it like writing in someone else’s sandbox?

Would you write in someone else’s sandbox again?