You may have heard about a group of people who called themselves the “Sad Puppies” allegedly because they’re sad that they’ve been excluded from voting in the Hugo Awards. They’ve never been prevented from voting; they have the same opportunity as the rest of the SFF community. But they have an axe to grind.

There are also the “Rabid Puppies”, a group who CALLED THEMSELVES RABID FOR A REASON.

I was sympathetic towards people on both sides of the divide, especially because I’ve seen a few people caught in the crossfire.

For example, Dave Freer has written diversity in his fiction. His novel Cuttlefish features an endearing romance between two YA characters, one of whom is white and the other isn’t. So, obviously, he doesn’t have a problem with diversity and representation in literature. He got caught up in the Sad Puppies vs Diversity Advocates because the Sad Puppies advocated for Dave’s work in a voting slate for the Hugo Awards (a people’s choice in science fiction set of awards celebrated at WorldCon, the annual science fiction world convention). Some people voted against Dave’s work, presumably because it was on the Puppies’ slate.

Apart from having met Dave in real life and found him to be intelligent and charming as is his lovely wife, and having read some of his stories, I have no idea of Dave’s politics. I haven’t asked. It wasn’t relevant when I interviewed him nor when I read and reviewed his book. (I have to admit I haven’t read Dave’s work that was nominated for the Hugo Award in 2015. Sorry, Dave. Assignments. Uni. Not enough reading time.)

There are people whose comments I’ve seen in my feeds but I’ve stepped back, I haven’t said anything or I’ve made comments about not giving the conflict oxygen and not giving people with superior entitlement issues attention. (The Department of Health Services, Victoria, has a brochure on violent and controlling behaviour by men that discusses entitlement issues; Edwin Shockney discusses delusional entitlement disorder; the Australian Counselling Association journal discusses relationship problems caused by entitlement issues.)

However, I made the mistake of not unfollowing or blocking them. Until yesterday.

For the uninitiated, “SJW” is an acronym for “Social Justice Warrior”, an equity advocate or person invested in diversity in the science fiction community.

It seemed so bizarre to me that someone would claim that diversity is doomed because one guy, whose followers far outweigh those of his critic’s, made a comment about “binge-watching”. I replied without thinking it through: if it hadn’t been so late at night I would have just unfollowed Rob and said nothing as a form of self-protection. Because if I hadn’t been so tired I would have realised the Puppies would dish out some of what they give to John Scalzi.

My point was that if “doom” = obscurity, then Rob was more at risk of obscurity than Tod VanDerWerff. I admit that, with Twitter’s 140 character limit and Puppies piling on the insults, my message was obscured.

Rob called me “dumb ass”. Presumably that’s a winning argument in his experience of debating ideas.

But he was “punching”, a euphemism for an unprovoked attack on someone else. They seem to accuse me of punching down and then punching up and then… well, their logic is most notable by its affinity with the Klein bottle, a “non-orientable surface”.

.@DarkMatterzine You brought up follower counts/ratios. That’s not a serious attempt at conversation. It’s meaningless.

@DarkMatterzine @robkroese Follower counts have NOTHING to do with credibility. That comment is astoundingly naive. — Constance Avery (@Sarrobsgirl) August 28, 2015

But follower counts are an indicator of whether you’re a dinosaur facing extinction or someone who is a popular part of the current DIVERSE culture.

Puppies who have never followed me and have never seen any of my comments on social media before have now judged me on one twitter stream in which the Puppies have insulted me, used non-orientable “logic” and called people who want diversity in science fiction names. As if that decides any issue. 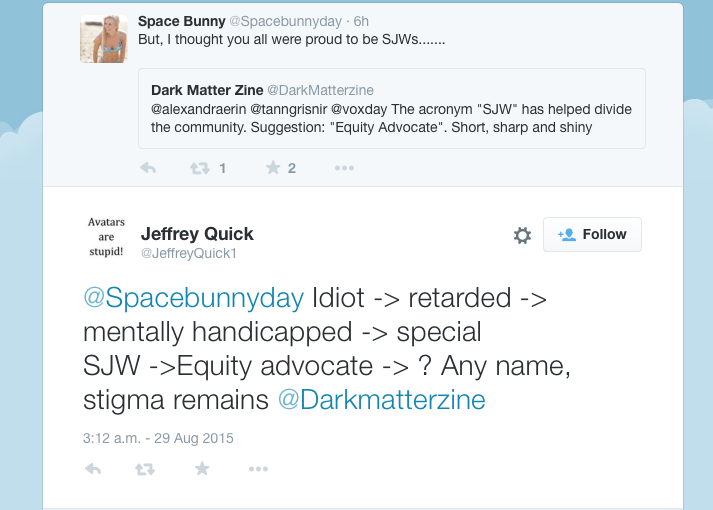 I personally have no problem with the title SJW. I have a Master of Social Science, I’ve studied disability arts advocacy and other forms of advocacy and I’ve worked in paid positions where I’ve advocated for people. However, some people take exception to the SJW title because it was derived by the Puppy/anti-diversity group and meant as a derogatory term. So I suggested a possible alternative. I’ll let Vox Day, that self-described Rabid Puppy, have the last word to demonstrate how rational he is.