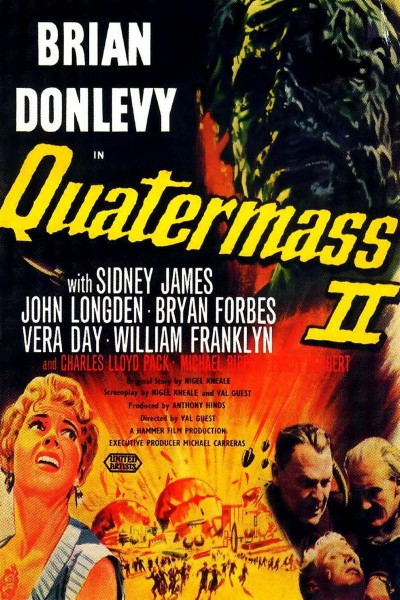 Quatermass II surprisingly continues on from The Quatermass Xpermient: Quatermass is trying to get his rocket off the ground but has his funding cut. He takes his frustration out on a subordinate, putting a (figurative) rocket up his bum. I wonder if that’s the origin of the saying?

Quatermass has a habit of refusing to listen to anyone — other scientists and his receptionist — when they have important things to tell him. For a scientist, he’s an excruciatingly slow learner. Meanwhile, his refusal to listen delays plot developments and his investigation.

Chunks of rock fall from the sky hitting a guy on the head, burning him. His girlfriend gets him into the car and drives for an hour to nearly have a car accident on a lonely road. Quatermass emerges from the other car. He helps the couple and takes the chunks of rock.

Meanwhile, Quatermass’s minions see meteors falling too regularly and too carefully, landing in the area where the guy was hit by the rock. When Quatermass and a red shirt [cough] colleague investigate, they find a super-sekret government project screaming ‘conspiracy’ right next to the ruins of a town.

Government conspiracies, parasitic aliens, a design for a moon base powered by solar energy — Quatermass II was way ahead of its time. It’s just a shame that the plot was a bit slow for this time. A monster appears looking like it might be related to the Seeds of Doom creature on Doctor Who made about 20 years after Quatermass II, evidence of its impact on science fiction. Overall, Quatermass II was a bit slow with a few ‘because plot’ things happening to get to the climax, however, I’m still pleased to have watched this iconic movie.