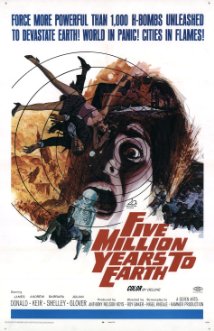 The above poster is not an error: Quatermass and the Pit was originally released as a TV series in black and white. Later, a different version made for cinema with a new cast was released under the title Five Million Years To Earth. The bluray release that I watched rebadged the movie under the original title, using the above poster flipped from left to right, rendered in black and white with a photograph added on the right-hand side.

Now I’ve sorted THAT out, on to the review.

Workmen are digging to prepare a new train line extending from the Hobbs Lane Station when they find a humanoid skull. Investigations commence, with an archaeologist confirming that the skulls are 5 million years old, breaking history as we know it. The researchers, headed by Dr Matthew Roney (James Donald) call upon the media to lobby for more time to properly excavate the site.

Quatermass’s boss dumps Breen into Quatermass’s project. Extending the hand of friendship, Breen invites Quatermass (Andrew Keir) to join him for dinner at his club.

Digging further uncovers something that should not be there. It’s not a pipe, it’s not a wall… It could be a bomb, so Colonel Breen (Julian Glover) is called in to investigate.

Quatermass tags along. Dinner is cancelled.

Men in army boots trample all over the site while excavating the thing. There’s a definite food chain evident here.

They uncover a (wait for it) thing. Colonel Breen is convinced it’s a missile dumped by the Germans in World War II in spite of records and evidence to the contrary, even when the space ship proves impermeable and they can’t cut into it no matter what amazing technology they use, not even when they use a drill attached to a mini-scaffold, and wave the drill around in front of the surface. (Yep, you actually see the drill bit not meeting the surface while he’s drilling.)

I don’t want to spoil the movie so let’s just say that Hobbs Lane’s spelling evolved from the earlier Hob’s Lane. Quatermass and the Pit melds science fiction with metaphysics, superstition and mythology. Mostly it’s done well, especially for its era and considering that the movie is intended as horror. Very mild horror by today’s standards. Think Doctor Who, which is a family show.

Quatermass and the Pit has plot holes, especially the final scene. Even a writer who declared repeatedly that he hated science fiction (Nigel Kneale) shouldn’t have got some of that wrong.

However, Quatermass and the Pit has some definite redeeming features. There is at least one black guy; this was progress. He isn’t there long, but he is there in the opening scenes. Most of the archaeologists seem to be women, one of whom — Barbara Judd (Barbara Shelley) — actually follows through with the menz right to the end. She isn’t even a love interest. A man puts her down as an hysterical woman when she is right. Although Quatermass and the Pit doesn’t pass the Bechdel Test, it is somewhat progressive for its era.

Five Million Years To Earth aka Quatermass and the Pit is one of the better Quatermass TV and movie productions made in the 1950s and 1960s that I’ve seen. Having said that, both the minion and I have vague memories of watching a black and white version repeated on TV around the time of Quatermass (1979) showing in Tasmania; my feeling is that the B&W version was scarier but I was only a teenager back then. I’m not such a fragile flower now. Overall, I enjoyed this version of Quatermass and the Pit; I particularly recommend it to science fiction fans and movie buffs.

There’s a theatrical trailer that you should NOT watch until AFTER you’ve seen the movie. Talk about end-of-movie spoilers!

Lots of interviews feature in the extras. Judith Kerr, author of When Hitler Stole the Pink Rabbit — a book you may have ‘heard’ me mention before — met and married Nigel Kneale, Quatermass‘s writer. As an elderly lady, Judith is interviewed about Quatermass and her husband. The love evident in her face as she speaks of her deceased husband is a joy to behold. She likens Quatermass and the Pit to every story, including her own most famous novel, because it’s a story about rejecting the ‘other’, even rejecting humans who are ‘not like us’. She likes Quatermass externalising evil, absolving humanity of responsibility for murder.

Julian Glover was interviewed in 2011 about Quatermass although he works in references to a number of other movies in which he has featured, including associating Breen with Walter Donovan. Although Julian rambles a bit, if you have patience to sit with the interview he comments on a wide range of topics including the cast and crew of Quatermass and the Pit, makeup and special effects and how they’ve changed. He compares Star Wars to Quatermass and the Pit, even commenting on how much he was paid for both.

It turns out that there are only 4 Quatermass stories, retold over and over. Not all of the originals are listed on IMDB. To avoid confusion:

The Quatermass Xperiment = The Quatermass Experiment; I’m sure you could have figured that out but did you know it was made in 1953, 1955 and 2005? At least? Those are just the listings on IMDB.

Quatermass II: this has at least one remake; listings are not complete on IMDB. IMDB’s version cites John Robinson as Quatermass where the version I have (an extra on The Quatermass Xperiment bluray) has Brian Donlevy as Quatermass.

This took me ages to figure out, crawling through IMDB because my version of Quatermass II didn’t fit anything on IMDB.