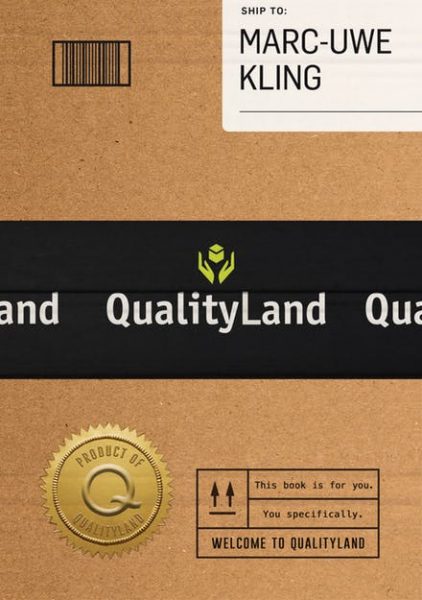 Qualityland doesn’t declare its location: the story could be in any Western country in the not-too-far-distant future. Although perhaps the fact that it was first published in Germany is a clue. The story and the translation are brilliant, however.

John of Us is an android. With the failing popularity of a political party’s leader, John of Us stands as the new presidential candidate. He’s intelligent, with policies that could save the country and help the underclasses and middle classes. The problem is, his opponent Conrad Cook spouts lies, propaganda and gibberish. Cook is winning the election.

Then Peter meets Kiki. And Peter takes us down into his basement, where we meet his family.

Qualityland skewers current politics, corporations and algorithmic manipulations of society. It’s Brave New World, 1984, Company and Jennifer Government all rolled up into one for the current era and set slightly in the future. (Apparently I’ve only reviewed Max Barry’s Lexicon and Machine Man; I need to fix that.)

Complete with brief history lessons as part of bantering dialogue, pithy observations about current politics and the internet bubbles, Qualityland is a clear and present danger to us all. Peter wakes up to this, aided and abetted by the gorgeous Kiki and an old man. He exposes this underbelly to the world, which notices for a news cycle while paid commenters push advertising and right-wing views.

The truth is out there

Qualityland reveals the truth as an allegorical window while a funny, fast-paced story knocks at the door. The door, by the way, is a sentient AI with feelings. And it keeps telling Peter off. I highly recommend Qualityland: so far it’s the most outrageous and most true novel for 2020. And I have a few book reviews for 2020 scheduled already. It’s already available overseas and the ebook is released in Australia on 9 January 2020 with trade and hardcover following shortly afterwards.