To read my reviews in order and to avoid spoilers, go to DMZ’s Shannara Chronicles page and start from episode 1. Note: in the beginning I was impressed. That impressedness fades to snark. There are spoilers below. You have been warned.

Having escaped the latest big bad with Cephelo’s aid, our heroes journey onwards.

Back in Arborlon, the changeling king drips poison in his poisonous son’s ears. Those two belong together.

En route, the journey-people are thwarted by snow so they detour into Moria — I mean Pykon — a mysterious abandoned keep.

In this abandoned keep, the team meet an elf who looks more like an orc and his half-elf daughter. He claims the way is barred, right before he drugs their food and hangs them up to dry. Well, hangs them up to bleed, anyway.

Eretria is kick-ass as ever even though I want her dialogue to be more sassy, more Buffy-esque.

At the end, Crispy Kebab (Crispin Edensong, played by James Trevena-Brown) says ‘Fly you fools!’ or the Shannara equivalent so Wil, Amberle and Eretria run away from the Balrog/Lich King then they drop into the abyss instead of Crispy Gandalf. Priceless.

But before the hanging, elfie allows them to bathe. Amberlie hops into a Japanese-sized shared bath for a soak. Eretria joins her and gets all Captain Jack on her ass — or should I say to her face — attempting to seduce Amberlie. Amberlie seems equally interested although they don’t even kiss before they’re interrupted.

Thus Amberlie, Eretria and Wil are all interested in each other; they could be a dynamic polyamorous trio. However, after this Xena-esque bathing incident, the girls acknowledge they’re ‘both into the same guy’ but rarely acknowledge their mutual attraction. The Shannara Chronicles hints at Game of Thrones–type relationships (remember the girls making out in the bordello?) but it falls short of fulfilling its implied promises.

Trying to have it all ways doesn’t really work: in my opinion Amberlie and Eretria could have consummated their relationship on or off screen to raise this fantasy series to a new level. If the consummation was off-screen then, as I’ve said before, with about 5 minutes edited out of the entire season, the rating could be brought down to M; with less spouty blood, it could probably be PG to incorporate a family audience. My gut feeling is that this series would work better aimed at a family audience. I guess a lot of parents will be flexible, knowing that the high-rated content is minimal but it’s possible to have a Shrek-type story that appeals equally to all ages without creating a high rating for marketing purposes.

Rating: 3 out of 5 stars
Director: Brad Turner
Writers: Alfred Gough, Miles Millar, Terry Brooks, Zander Lehmann
Stars: Austin Butler, Poppy Drayton, Ivana Baquero
Notable appearances: most of the important but not central characters including Brian Blessed as the king and the changeling king, James Remar as the ever-annoying Cephelo and Aaron Jakubenko who, incidentally, was not only in the ugh-worthy Neighbours but he was in Neighbours vs Zombies. I’d even watch that! 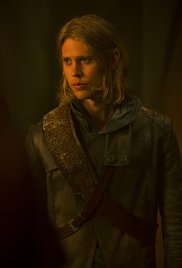