On a brisk Sunday afternoon late in May about 25 women wended their way to Hotel Hotel (what an original name!), braving the labyrinth within to locate The Shed for a TEDx Canberra public speaking workshop for women.

The Shed is, as its name suggests, an unfinished space. Like Melbourne’s deconstructed coffee, The Shed takes hipster fashion to a new extreme. Rough unfinished concrete floors and ceilings are joined by frames — exposed wall studs — some of which were partially clad by unpainted plywood. Building materials lay around the space as did some woodcuts that looked like escaped Christmas decorations, 2-D reindeer antlers posing as bushes. The tables were unfinished wood ready for staining. Every time anything was spilt. The chairs were marginally better than the ones at my old high school: the backs at least sought to push forward. Unfortunately, the front of the seat also pushed up into my legs, cutting off circulation.

That wasn’t the worst of it.

When planning to attend a public speaking event in a hotel conference venue, one expects a certain level of air-conditioned comfort that was lacking. I was lucky: I wore thermals under my trousers, a woolen waistcoat over my shirt and a thick woolen coat over all. Although I expected to shed the coat, The Shed was too cold. I remained clad in outdoor clothes the entire time while others not so prescient shivered and complained of the cold. For three hours. No wonder that, when the event was over, most opted to keep socializing to a bare minimum and fled the building to the warmth of home heating.

Katrina Howard, the primary presenter, has a Bachelor of Counselling and Human Change from the Jansen Newman Institute. The other presenter was Ingrid Tomanovits from TEDx Canberra, a former EL2 (executive level 2 public servant) whose prior position involved ‘going to work and talking to the people’ (quote from her presentation). Currently she’s employed at Wisdom Learning, a company that aims ‘To help people and organisations reach their full potential’ by ‘[m]aking a positive difference to people and organisations by providing learning, facilitation and consulting services that are focused on achieving our clients’ outcomes’.

According to the Facebook event, ‘this three-hour interactive workshop is targeted at professional women and will build skills, confidence and competence. Learn how to connect with your authentic voice and how to utilise that effectively in public speaking and professional presentations. Bring a real life public speaking assignment or task along to work on and receive feedback on progress with your presentation so far, as well as ideas on how to make it more engaging and appealing. If you don’t have a ‘real life’ task, we’ll help you develop and practice the skills you’ll learn through practical exercises.’

During the afternoon, Katrina explained that there are loads of TED talks on how to make a good presentation so they decided not to go down that path. Instead, Katrina and Ingrid elected to focus on motivational techniques like choosing an object and, later, a photo, and describing what that object/photo says about public speaking.

The presentation included some role-modelling performed by Katrina and Ingrid as well as some slides linking diamonds to ‘captivating’ and Ghandi to charisma or consistency. When they started talking about being consistent with Ghandi on the screen I started giggling. [shifty eyes]

Instead of working on presentations in groups, we had 3 minutes each in pairs to tell a story then give feedback to each other.

Some practical elements were included by the talking heads, like disclosing that TEDx has a red dot where people must stand so they don’t wander around the stage. They also briefly discussed hand movements.

Presenters encouraged people to talk in a singsong voice like airline stewards because, apparently, that helps people retain information. Personally, I switch off. I guess it takes all sorts.

Afternoon tea was delish: I had a brownie/cake hybrid with too much icing and (surprise, surprise) a coffee. Because I NEVER drink coffee. Afterwards there was wine and a few nibbles but, after my first taste of their ‘nibbles’, I avoided the food. It tasted very smoky and the thin terracotta base pretending to be a cracker stuck in my teeth, taking some time to work free.

I’ve had substantial public speaking training over a lifetime, starting when I was in grade 6 and continuing throughout my studies and other pursuits. Thus I expected this session to be a refresher course rather than the repository of all wisdom. (Not the SUPpository as some would say.)

Networking was the best part of the afternoon: meeting everyone from a Liberal Party candidate to another woman experiencing discrimination in the workplace. I embarrassed myself with the political candidate by laughing when she revealed her affiliation but she was absolutely lovely, even giving some audio-descriptions of photos at the end. I stayed late, chatting. (The political candidate rushed off to attend THAT speech, the one on 29 May.)

TED and TEDx have caused considerable controversy because they require speakers to write, put in a minimum of 50 hours of practice AFTER writing their speech and perform for free all while TED/x charges a premium for seats. In comparison we were lucky: the Open Mic event held in early May was free (drinks available at the bar) and this public speaking seminar ‘only’ cost $80 per head for the approximately 25 attendees and light refreshments were provided. Pity about the lack of heating. Someone suggested that some people are being paid, which could justify the cost. TEDx Canberra says they work ‘with’ local speaking coaches, which implies they’re not volunteers. Still, I’d like to see profits donated to charity or some other accounting for the cost of membership considering speakers aren’t paid.

Personally I’m ambivalent about the whole TED and TEDx thing: on the one hand, I’d speak for free to raise my profile. On the other hand, the speakers they invite tend not to need the publicity. Not to mention the furore in writing circles about being asked to write or speak for free.

The Perfect Pitch event was a psychically warm but physically cold event where presenters sought to give people a big figurative hug, encouraging women to speak up without venturing into negative spaces like discussing discrimination and how to deal with it. Statements had to be ‘I’ statements like ‘I feel I should be quiet’ never ‘People tell me to shut up because I’m a woman’. This is both positive and negative: owning these messages can be empowering and disempowering, depending on whether the woman has sufficient power to speak and be heard.

The Pitch Perfect focus was motivational not practical, which disappointed a few of the attendees I spoke to afterwards. The advertising may have misled attendees: even I expected more practical information and more practical exercises. It’s possible the handouts given to some people at the end of the seminar provided some insight. (I almost snagged a copy but the woman handing them out turned away and walked to the other side of the room. She probably thought I couldn’t read on my desktop magnifier at home.) However, the day after this seminar I resumed writing my novel. The motivational aspect and the affirming networking gave me the impetus to speak up in my own way. 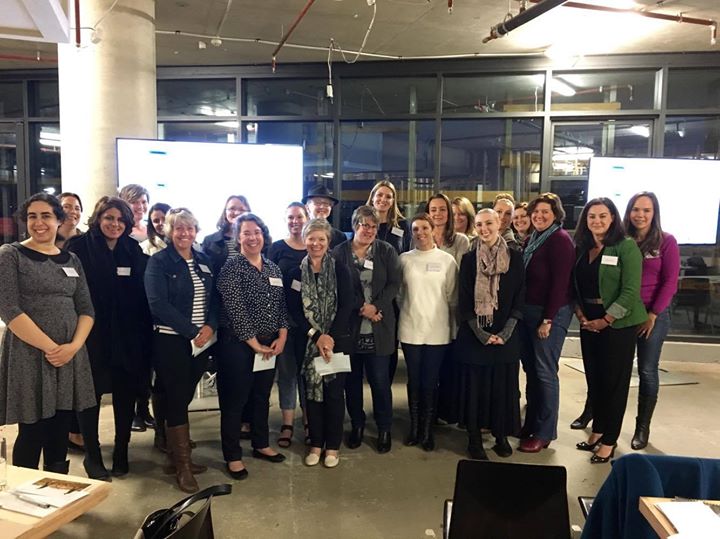