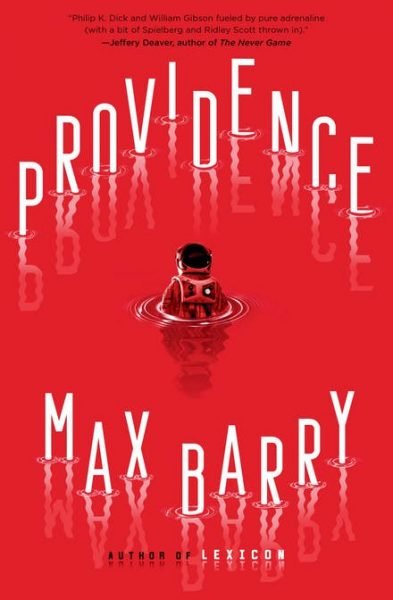 The Providence is a battleship designed to wage war against an aggressive alien foe, staffed by only 4 people. The ship has an AI deemed better equipped to make decisions than humans. So much better equipped that it chooses its own crew, with interesting consequences.

Gilly, Talia, Anders and Jackson are the Providence‘s crew. They met each other during training, while Jackson – a decorated war hero – resisted offers to return to the front lines. Every six months, Jackson returned to the training facility as her superiors ordered, until finally she capitulated and agreed to return to the space war. Talia is the political officer and counselor rolled into one. She pushes the crew to fulfill its social media requirements. Anders has an addictive personality so he’s perpetually seeking an adrenaline high – not dangerous at all during a space war! – as well as ways to get his next drug fix. Gilly is the IT geek who realizes, not that long into the 5-year mission, that he’s been manipulated. And yet he allows himself to be manipulated again and again.

This crew of misfits is more the Aftermath-level of dysfunction of the Blake’s 7 crew than anything else. Gilly, of course, is Vila.

After his earlier books – Jennifer Government, Machine Man and the like – I came to expect a certain type of humor and outrageous but almost-contemporary stories from Max Barry. Lexicon was a bit of a shock because it was such gruesome horror and a distinct shift away from the side-splitting political and cultural satire Barry produced previously. However, I pressed on through, despite my distaste for bloody – EXTREMELY bloody – horror and felt shaken yet rewarded for persevering.

Providence is another shift for Barry: this is a story that can be read as shallow space opera. Hell, back in the 90s, I watched Babylon 5 with friends who didn’t see the Nazi imagery in EarthGov and the Night Watch, so I figure ANYTHING can be read superficially. However, I think Providence would be easier to mistake for shallow space opera for those who just want a Starship Troopers meets Blake’s 7 type of story.

For those who enjoy satire and are familiar with Barry’s trademark humor, however, I believe he’s giving society the side-eye in a more subtle way than was his previous habit. I finished this novel about a week or so ago and I still haven’t made up my mind about some of Barry’s intentions and implications in Providence. I don’t believe I’m going to say this, but this space opera is actually good fodder for book club discussions! And if you’re going down that path, read Birmo’s Cruel Stars while you’re at it. Nazis starting WW2 in space meets Trumpian politics meets… whatever. These two authors are writing the space operas/space wars that reflect our time.

Providence is a space opera/space war gleefully referencing iconic science fiction from the days when speculative fiction was proud to wear the label ‘science fiction’. This novel is Starship Troopers meets Friends meets Blake’s 7, of which Farscape was the reboot and Americanized version. It’s also Enders Game, 2001 A Space Odyssey and George Orwell rolled into one. Read Providence as a fun, splodey story or as social commentary and satire. I highly recommend it.

Rating: 4 out of 5 stars
ISBN: 9780733643019 (plus other codes for other formats and probably for other geocodes)
Imprint: Hachette
Format: trade paperback, 306 pages
Released: 2020
Category: speculative fiction, social commentary/satire