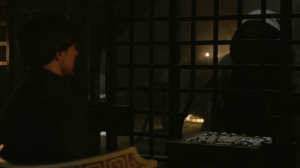 Riario, illegitimate son and agent of the Pope, takes strategy lessons from a mysterious prisoner while also learning to play ‘Go’, a classic Chinese game.

A psychotic nun wanders the streets of Florence covered in mud, breasts exposed, and screaming until accosted by Giuliano Medici. Seizing a guard’s dagger, she puts out her eye, killing herself in the process with blood splatter that reminds me of Torrentino although far more restrained.

Da Vinci’s servant pleas for Leonardo to investigate goings-on at the convent because a friend is within the convent walls. Although selfishly ranting at first, Da Vinci capitulates, arriving around the same time as Giuliano.

Giuliano Medici’s violent anger towards Da Vinci is unbalanced, lacking maturity and failing to take into account Da Vinci’s importance to the Medicis and Florence. By the end of this episode that anger seems to be dissipated somewhat; I hope this is a sign of character development beyond some stereotypical testosterone-poisoned male.

Investigations into Lorenzo’s traitor progress. Lucretzia is forewarned by Lorenzo’s wife, Clarice, whom Lorenzo loves and who tolerates Lucretzia as Lorenzo’s mistress.

For a while I thought this episode was going to go down the rabbit hole, embracing Medieval superstition as reality, but Da Vinci brings a Cadfael-like tone to the story.

Da Vinci’s Demons seems intent on following in HBO’s footsteps including becoming increasingly gratuitous and sexist with its nudity. Women’s breasts are revealed to seduce a lover (twice, once with full-frontal nudity) and ‘possessed’ nuns expose their breasts because, dontcha know, those possessed nuns hafta show their titties. And no-one would think of covering them up in mixed company. [eyeroll] I hope this trend does not continue.

On the topic of sexism, I don’t think the ‘Prisoner’ passes the Bechdel Test; I’m not sure if there’s an intra-nun conversation without men present but I don’t think so. The only conversation I recall that was definitely women-only was between Lorenzo’s wife and lover, who were talking about Lorenzo as well as the investigation.

I’m enjoying this series more as it progresses with its ensemble cast not merely relying on the titular character, the state-versus-religion politics, the relationships, the pretty clothes (yes, even I can occasionally be seduced by a sumptuous wardrobe) and more. There is definitely room for improvement with this series but it’s gaining ground fast.