I was a bit slow to watch Pride and Prejudice and Zombies because I loathed Warm Bodies in spite of its failed attempt to mash-up Shakespeare and zombies. However, I feel myself being converted — by inches — to the zombie genre. Or, at least, to highlights of the genre.

“It is a truth universally acknowledged that a zombie in possession of brains must be in want of more brains,” says Lizzie in a voice-over while we watch Colonel Darcy (Sam Riley) enter an underground tunnel to gain access to Netherfield in search of a zombie at a tea party. Unfortunately he misses one. So his best friend and comrade-in-arms, Mr Bingley (Douglas Booth), takes up residence at Netherfield to be wooed by Mrs Bennett (Sally Phillips).

From the opening lines I loved this movie. From the opening scene the minion was enraptured, enthusing over the visuals, the level of detail in landscape shots showing Netherfield’s zombie defenses in addition to and replacing the usual fences.

Steers has perfectly blended the traditional story with the zombie genre, creating a classic romantic comedy. Some of the highlights include the Bennett sisters arming up for a genteel outing and, when the alarms sound, marching in formation towards danger. The fight scenes are well done, including adding zest to Lady Catherine de Bourgh’s confrontation with Lizzie (Lily James); Lena Headey couldn’t be more perfect for the role.

The gorgeous Matt Smith works hard to be revolting as the obsequious Parson Collins yet he succeeds brilliantly with those practiced compliments and bungled gallantry. Jack Huston cuts a dashing figure as George Wickham.

It’s distracting to see Charles Dance as Mr Bennett; I expect him to be scathing to his daughters but he saves the put-downs for Mrs Bennett and carries the role of loving father convincingly — as long as you can put aside images of Tywin Lannister verbally eviscerating his children.

Jane Austen, the author of the original Pride and Prejudice, was a commercial writer specialising in comedy. Her books are only considered to be ‘Literature’ now because they’ve stood the test of time. I like to think that she’d be happy to see her work celebrated now, including with this evolution.

Curiosity as to how this mash-up was going to handle the traditional storyline kept me on the edge of my seat and I wasn’t disappointed. Right through to the end, Pride and Prejudice and Zombies managed to remain reasonably true to the original while consistently blending in zombie shenanigans. Pride and Prejudice and Zombies and Deadpool are now officially my two favorite Valentine’s Day movies. Both will be classics. 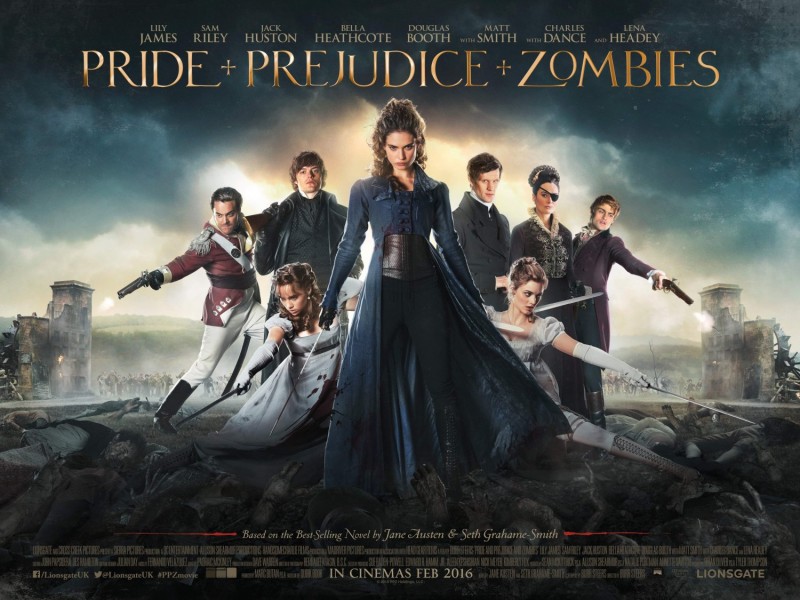