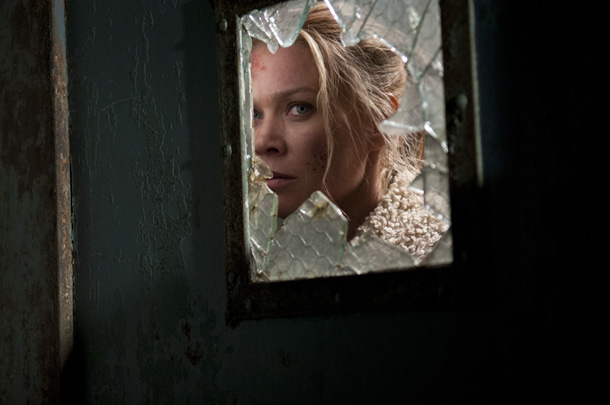 ‘Prey’ begins with a flashback of Andrea (Holden) at a campsite with Michonne (Gurira). Michonne knew the zombie bodyguards when they were human; she had a low opinion of them then.

Milton’s (Roberts) distrust of the Governor (Morrissey) is made clearer when he tries to reason with the Governor who refuses to listen. Milton reveals the Governor’s plans to Andrea including the planned capture of Michonne and death of Rick’s (Lincoln) group. Milton shows Andrea the Governor’s torture chamber and asks her to warn the prison. She agrees, but tells him he can’t keep looking the other way if he stays.

Martinez takes Tyreese, Sash, Allen and Ben to where the group are collecting biters. Tyreese and Sasha are not okay with what is happening, but their ex-travelling partners are not at all repulsed.

The Governor finds Andrea and chases her down with his car, but lets her escape into the woods. She finds a building to shelter in but he taunts her and chases her throughout the building. He finds her when she is trapped by a zombie horde in a stairwell. She releases the horde onto him and he fights them off as she makes her escape. Andrea makes it to prison, but is tackled by TG at the last minute.

Someone has set fire to all of the collected zombies. Milton and The Governor discuss Milton’s guilt without actually saying it.

The episode ends with Andrea in the Governor’s torture chamber.

One of the most frustrating parts of this episode? When Andrea escapes the building by releasing the zombie horde onto the Governor. He left his car sitting right outside and she didn’t take it! Argh!

Regardless of Andrea’s faux pas, ‘Prey’ was a great episode where the Governor starts to lose more of his devoted followers. He’s one smooth operator to have lasted so long without arousing more suspicion amongst his people.

The character development of Milton has been interesting to watch, though I feel his time may be limited as the Governor starts to realise his faith is wavering. To go from such a loyal lapdog to being willing to sacrifice everything to defend people he has only briefly met, is truly a great development that has been executed well.

‘How am I gonna relax if you keep telling me to relax?’