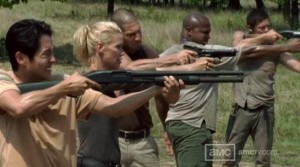 [Spoilers, Sweetie — review includes a synopsis of the episode]

‘Pretty Much Dead Already’ begins with Glenn (Yeun) telling the rest of the group that there is a horde of zombies in the barn. Shane (Bernthal), the ever-growing antagonist, believes they should go in without Hershel’s (Wilson) permission and slaughter them. Rick (Lincoln) disagrees and says he will speak to Hershel.

Dale (DeMunn) reveals to Andrea (Holden) his fears about Shane, but she shrugs them off (my notes actually say “and as usual she’s a bitch to him”).

Rick talks to Hershel about the barn and despite Rick making the case that Lori is pregnant, Hershel demands the group leave his farm by the end of the week. Maggie (Cohan) has been listening to the discussion and confesses to Hershel that Glenn saved her life when she was attacked by a walker in town. As they have this discussion, Hershel’s stepson comes in and says ‘it has happened again’.

Hershel goes to Rick and asks for help where we discover the ‘it’ that ‘has happened again’ is walkers getting stuck in the farm’s creek. Hershel tells Rick his group can stay on the farm if he helps herd the walkers into the barn, a job previously belonging to Otis.

Shane’s resentment of Rick becomes even more clear when he tries to convince Lori (Callies) that he is a much better man for her and Carl than Rick is. Lori makes it clear to Shane that the baby is Rick’s even if it isn’t.

Shane puts on a grotesque display, shooting the zombie that Hershel is herding to the barn. The culmination of his display is to break open the barn doors. Several of the group line up to shoot the walkers emerging from the barn.

The episode ends with the last walker emerging from the barn – it’s Sophia. While everyone else in the group freezes, Rick does what needs to be done and kills her.

Well, everyone had faith that they would finally find Sophia and they did. Kinda. To be honest I had lost all faith that the little girl would be found alive (sorry, Daryl), but to see her come stumbling and growling out of the barn was a shocking television moment.

All round good episode. Not great, but good.