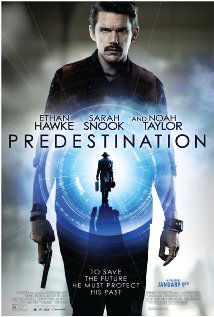 A time cop about to retire is determined to capture the one criminal who has eluded him throughout time. Predestination is a time travel story whose purpose is to present a paradox to the audience. It’s a story originally written by Robert Heinlein in one day, July 11, 1958, and sold to Fantasy and Science Fiction magazine after being rejected by Playboy. I’m guessing Heinlein had some bills to pay.

The original story doesn’t intend to focus on characters or their journey. It’s a mind-fuck, middle-twentieth-century style.

And that’s the problem with the movie.

Although the movie is well made and the acting is consistent with the style of the movie, I never cared about the characters. Watching Predestination is an intellectual exercise to figure out what’s going on.

Once I figured it out, I curled my lip in disgust at the realization of what had occurred. Then I railed against the two-dimensional self-destructive narcissistic characters.

I promptly forgot I’d seen the movie until someone talked about a recent movie made in Melbourne, in building 100 at RMIT and at Melbourne University. Then I was like, “Oh, yeah, I remember my partner telling me this movie we watched was made here… What was that movie again?” When my son reminded me about the time travel paradox it came flooding back to me.

If you’re interested, save time. Read the short story. YOU’LL THANK ME LATER.