Day 1 of PAX Australia 2014, I was at a loose end after admiring the Rebel Legion snowspeeder for the second time. I wandered over to the nearest theatre.

One very cool feature of the Melbourne Convention Centre is the screens advertising the present and upcoming schedule for the nearest theatre. This theatre was Wombat — apparently Australia doesn’t have enough mythological or deadly creatures to call all theatres something suitably chilling for Halloween. The advertised panel was, you guessed it: ‘Political proactivism for geeks’.

After the latest federal budget, many Australian “geeks” were upset about the cuts and lack of support to science, the arts, libraries, and tech. So, how can we express to the powers that be that we value our libraries and art galleries, our CSIROs, and Interactive Game Funds?  Does slacktivism achieve anything?  Are protests outdated? Can video games be an effective tool for political persuasion?  Help us brainstorm positive ways to express our shared values to all sides of politics.

I confess my disorganisation meant I walked in about 25 minutes in to this fascinating panel. My notes (below) are from the second half of the session only. I had no idea who was who except that Bandt guy looked vaguely familiar, he might have been on the news once or twice.

Below is my best recollection of the panel combined with what I can decipher of my appalling handwritten notes of this awesome panel.

Two panellists had separately been involved in developing computer games that were somewhat [ahem] subversive. 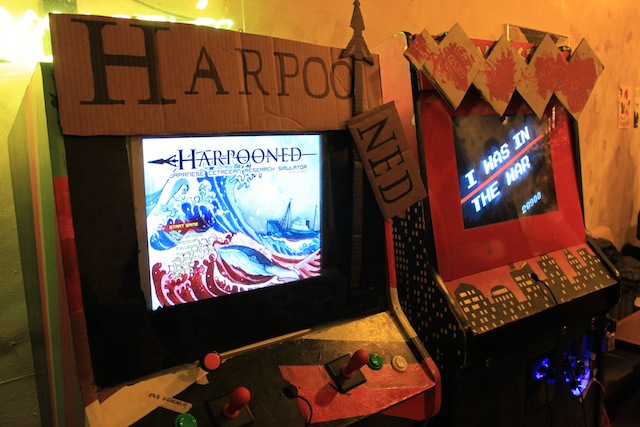 Harpooned was a gross game about killing whales. This game was so gross that a teen’s game show featured it, citing the game as pretty good. This publicity helped the trailer to get 100,000 YouTube views in a short space of time and 20,000 downloads of the free game.

The dude involved said he didn’t know if Harpooned actually saved whales. He said that, for any form of activism, practical related goals need to be linked to the project. The only thing that’s really saving whales is Sea Shepherd getting in the way of harpoons and he doesn’t know if the game increased Sea Shepherd‘s funding. Although there was a recent hiatus in Japan’s whaling, they are about to return to the slaughter of whales to supply restaurants — ahem! — to assist in scientific research. Presumably research about how quickly Japan can bring about the extinction of whales.

Escape from Woomera was built using Half-life as a basis, modding it to gamify it in a story-game format. It was highly controversial, especially as it was built using government funds from an arts organisation. The presenter declared that the game-makers were not endorsing people escaping from detention centres.

For those not in the know, Woomera is a former refugee detention center out in the desert. Australia now sends its refugees to places like Nauru, where children are allegedly threatened, assaulted and live in fear for their lives, which is so much more humane than on-shore processing. [snark]

GovHack encourages people to use government data in visualisations, data journalism and games. Some recent projects include the following games: When will my house be underwater?; Aussiemon (think Pokemon but with Australian animals); and a Shaun of the Dead–type game where you escape the zombie hordes by hiding in a pub.

One of the panellists highly recommended watching a 2 minute Ted Talk explaining metadata. A quick look hasn’t turned up the right video, so if someone would like to leave the URL in the comments, I will update this post, giving you credit for finding the link.

The moderator asked if geekdom is too fractured for activism, citing the Candy Crush Controversy as divisive.

One of the panellists said, ‘If geeks find enough that we believe in, enough that is sufficiently important to us, we will unite and put aside differences.’

Panellists agree that the current LNP government is expanding its powers, changing the structure of people’s interactions.

Adam Bandt declined to speak on voting in elections so another dude stood up to declare that abstaining from voting says ‘do what you want, I don’t care’. This panellist urged people to vote for someone with ethics who will stand for something. Yes, we have a two-party system, but that system will only stay a two-party system if Australians passively stand by, not voting for people outside that two-party paradigm.

After passionate dude-who-very-nearly-campaigned-for-Adam-during-the-panel finished speaking and sat down, Adam spoke appreciatively about how 500 geeks helped win his marginal seat. How the Greens (the truest liberal party in Australian politics, not to be confused with the Liberal Party who are, in fact, conservative) undertook data collection then the geeks had data-parties where they gathered together to put the data into usable format. That information was then used to tap into community concerns, to get people talking to one another and to win a marginal seat, changing the face of politics in Victoria.

The topic of the Trans-Pacific Partnership rose to the surface like sewerage. Apparently the TPP is being negotiated behind closed doors while politicians declare it’s ‘top secret’. This top secret discussion, this discussion that our country’s leaders say is too boring for us mere voters, this could have dire ramifications on Australians. The TPP may impact upon metadata, its retention and use; copyright legislation; and many more aspects of daily life in Australia.

The changing face of journalism

On the up-side, social media is changing political campaigns. For example, Australian minister Fiona Nash sought to close a drug information library. Campaigners took their message to Nash’s hometown, even to the Cherry Festival in Nash’s hometown. Nash’s neighbours (who sometimes chat to her over the fence) talked to activists about the drug information library and what would be lost if this library is closed. This campaign was partially made possible by effective use of social media and by canny activists.

This panel was encouraging and upbeat in a time where it’s easy to be pessimistic and, feeling powerless, slide into apathy. This panel of intelligent, active people were inspiring. I’m just disappointed that I didn’t see more.