In 1991 there was a successful movie called Point Break. Keanu Reeves (formerly of Bill and Ted’s Excellent Adventure the movie and TV series) stars as an FBI detective hunting down gang who are robbing bank while wearing Halloween masks of former presidents. It’s been decades but I remember loving this movie although I wasn’t as much of a fan of the ending as my surfer brothers and their friends.

Fast forward to 2016. I received Point Break the remake for review.

Luke Bracey is known as John Utah or Utah; ‘Utah’ means ‘people of the mountain’ or something and his mother is part ‘Indian’*, so he has a spiritual connection with high places. REALLY?! How about you cast an actor who is, y’know, part Native American if the character is supposed to be part NATIVE AMERICAN? Just a thought.

*(I’m pretty sure he meant part Native American; Luke Bracey is even less convincing as a native of the subcontinent.)

Utah has a ‘real’ surname but it’s not listed on IMDB. Apparently IMDB staff are as interested in Utah as a character as I am.

Utah pushes another young man to dirt bike in dangerous terrain. The other guy fell to his death although how he got up there on his bike to fall off, I have no idea. After the death, Utah reforms: he finishes school then college then he’s accepted into the FBI, sort of.

Bodhi is the gangster-leader, an extreme sports turned eco-terrorist, played by Edgar Ramírez (a long list of credits, none of which I’ve seen, probably because I’m an ignorant Australian who only speaks English and, with my vision impairment, subtitles are a struggle).

In the beginning, the gangsters stole some money and, like Robin Hood, they cut it loose and let it rain on an impoverished village. I’m not sure what good US currency is where they were, what use money is when rained on a jungle or what a plane carrying 2 pallets of US currency was doing flying over a jungle outside of the US.

The other thing they’d done was steal diamonds and they gave them away too.

The gangsters began as peaceable rogues with a sense of humor, hence the one-off wearing of ex-Presidents masks. No one was killed in any of the early heists.

Utah talks to his bosses at the FBI, spins them a tale of gangsters completing a ‘Big Eight’ set of Herculean feats, conquering nature. No one buys it, except his boss.

Utah goes undercover. Then he goes AWOL because ‘I’m right, I know I’m right’ without any evidence or even some definitive verbal declaration.

The gang plus Utah go hiking then diving off a cliff for the helluvit.

The gang are religious in their fervor, becoming a cult by the half-way point of the movie.

Utah, conformed malfeasant that he is, would NEVER incite anyone to their death again, would he?

Oh, wait, he would. Aaaaw, feel sowwy for the poor widdle boy who never learns.

But he has the sexytimes so everything’s ok.

Except FBI boss-man not happy because he’s at a rich man’s party with drugs and sexytimes without producing any results.

Utah participates in their next heist, which happens to involve killing people.

Because it’s a natural progression to go from wearing comical ex-President masks and giving security cameras the finger to planning cold-blooded murder with the intent of putting the gold in them thar trucks back in the mine from whence it came.

I’ll skip over the rest of the gory details. Plot = stupid.

The acting is wooden. Or plastic because ARTIFICIAL. Point Break features some real actors (not just former soapie stars) like the award-winning Ray Winstone. Even he can’t turn a sow’s ear into a silk purse although his scenes are a break from monotonous line-grinding by Utah/Bracey.

Bracey didn’t inspire in November Man and now he’s on my Tom Cruise list. (TCL: wooden actors, only watch if you’re REALLY into the movie, like if it’s a Phillip K Dick novel brought to the screen or if, in the movie, the actor gets killed over and over, and over again.)

Bracey is so bad I wouldn’t be surprised if he’d had Botox injections. A FULL FACE Botox job. No one, not even Ian McKellen and Dame Judy Dench, could carry this script that struggles — and fails — in its aspirations to achieve mediocrity. And Luke Bracey will NEVER be a McKellen or Dench.

At times the scenery is breathtaking but the camera work is uninspired. Some scenes are so poorly executed that I was convinced I could see the green screen merging with the scenery. The water scenes and the final climbing scene are the worst.

IMDB has the original Point Break rated at 7.2 while this movie is rated at 5.4. Anything below 7 is usually ‘view with caution’ and, when it’s below 6, it’s ‘proceed at your own risk’. I agree.

It could have been a Star Trek reboot but, for that, you’d need a good writer who understands and loves the culture and the genre. It’s worth noting that the creators and screenplay writers for the original movie aren’t credited with writing the remake but they are credited with Point Break-related DOCUMENTARIES, showing they know the culture. 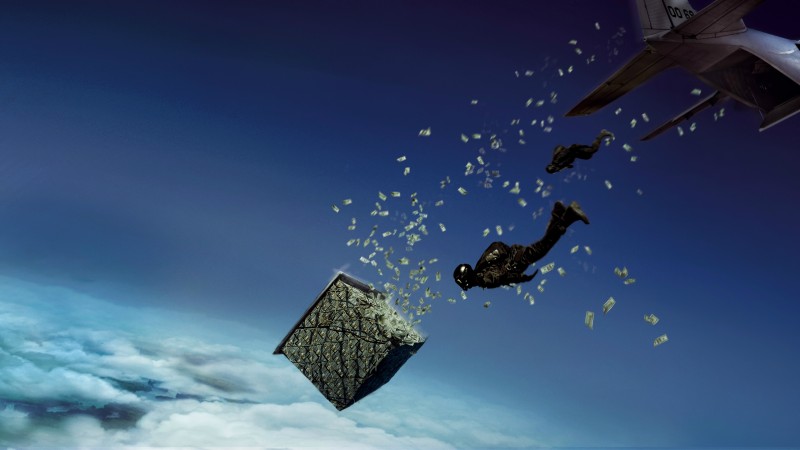