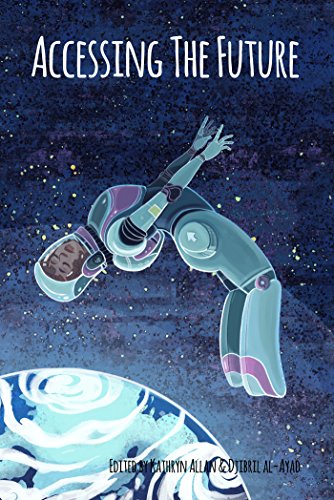 I began reading the Accessing the Future anthology (edited by Kathryn Allan and Djibril al-Ayad) at the beginning because that seemed to be a very good place to start. My advice? Skip the acknowledgements, preface and introduction, at least until after you’ve read the anthology. There is a lot of repetition between the three and even within each piece not to mention SPOILERS. This is an anthology of fiction stories not a text book; more care needed to be taken not to spoil the stories.

Usually an anthology or collection will lead with the most impressive story to grab the reader and help the reader get excited or invested in the book.

‘Pirate Songs’ by Nicolette Barishcoff really did not hit the mark.

I wasn’t sure whose point of view ‘Pirate Songs’ was told from most of the time, but it was Margo Glass’s story. Her space ship had an accident that killed everyone else — or was it unmanned? I’m not sure — leaving her alone and unconscious. When she regained consciousness, she’d been rescued by pirates searching for booty.

The pirates have no plan for her maintenance or disposal when they pick her up and are surprised to learn that Margo needs a wheelchair because she has spina bifida, a condition that Margo describes as “missing spine” as if she’s a jellyfish. The people I’ve known who have spina bifida don’t have ‘missing spine’ and can walk although they have other complications like needing catheters to urinate. (The Victorian government has a brief explanation of spina bifida here.)

Margo’s personality is complicated although, rather than adding depth, I found her complexity jarring in her inconsistency. A large part of the story features Margo dragging herself around the ship by her arms, urinating over a hole in the floor without assistance or disability access with only her arms for support (how did she urinate at all and how did she not fall in?) or being perved on by the male crew.

Margo is the central character of her story in spite of the somewhat old-fashioned omniscient storytelling style. It’s rare for people with disabilities to feature at all in pop culture other than as victims, villains or side-kicks. Thus I’m ambivalent: is bad representation better than no representation?

As a person with a disability, a Masters degree in Social Science and disability arts advocacy training by disabled people for disabled people, I think I’m especially qualified to review an anthology of stories about people with disabilities. I disclose all this so no-one thinks I’m crip-bashing from privileged status.

I didn’t get past the first story in this anthology because it was so obviously written by someone who does not understand spina bifida and yet it’s the lead story in an anthology about disabled characters. Not cool. I cannot imagine my daughter’s high school friend who has spina bifida writing a story where she dragged herself around with her arms and peed into a hole without a catheter.

I plan to search for the anthology (it’s got to be on my computer SOMEWHERE) and try to read some more of it. Hopefully other stories will be written by “own voices” authors.

Best part of the Amazon page: 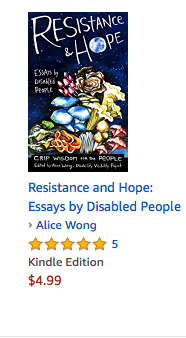