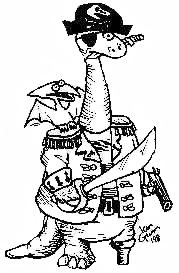 I’m no dinosaur expert, all I know is that the dinosaurs in Jurassic Park are NOT from the Jurassic era. I think they’re from the cretaceous period. Anyhoo, this dinosaur looks suspiciously like a Brachiosaurus to me. However, Ian Gunn refrained from identifying the specific genus of his portrait. I think that’s a pterodactyl sitting on his shoulder.

This poor vegetarian dinosaur has lost a leg and an eye. I wonder if he ran foul of a group of velociraptors? Those guys creep me right out!