The 100 has been on my TBW list for some time. Ironically, I finally started watching because of the controversy about the show killing off a lesbian character. She was so beloved of the queer community, her death caused such rage and mourning, that I felt the need to see what the writers did right — up until the point where they royally fucked up.

I started watching Dark Angel knowing that the series had been axed before it reached free-to-air broadcasting in Adelaide, where I was living at the time, so I knew to expect the end of the series. This made the end so much more palatable, as did Max Allan Collins’s trilogy that rounded out the series. I hope The 100 is likewise redeemed in spite of the death of the lesbian character. We’ll see.

The premise: nuclear war destroyed life on Earth. Before the end, 12 nations placed refugees on their space stations that have since banded together to become one international space station, an ark to save humanity.

An engineer discovered system failures that doomed the ark. He was convicted of treason and ‘floated’ (shoved out an airlock without protective gear to die). His 17-year-old daughter was put in solitary confinement.

All juvenile offenders, all 100 of them, are forced into a life pod and sent down to the surface. This buys the ark another month of life at the current population level while also providing information about the potential for survival on the surface.

Youthful exuberance and outright stupidity results in three young men releasing their safety harnesses. When they’re tossed around the ship, two die — but not before they damage crucial systems. The ark loses communications and control.

Bellamy Blake (Bob Morley), the older brother of a juvenile — Octavia (Marie Avgeropoulos) — convicted because she was the second child in a family, sneaks on board dressed as a guard. Bellamy has delusions of leadership. He encourages Octavia to be the first human in 97 years to set foot on the planet so her peers remember her for something other than being the second child in a family.

Clarke Griffin (Eliza Taylor) realizes they’re miles from their target landing site where food and water should be available. She leads a group of 5 to find the supply base.

The remainder stay behind, yelling stupid slogans about doing whatever they want whenever they want and removing the bracelets that monitor their life support.

Political tensions mount on the ark. Doctor Abigail Griffin breaks the law to save their leader so that a ruthless wannabe-leader won’t take over. Abigail is sentenced to death.

The pilot hits the ground running. Dangers and conflicts mount up, both of the human and the natural (or nuclear) kind. The sound track wins with ‘RADIOACTIVE’ playing loud. Octavia, a gorgeous girl, should have been killed but wasn’t — gah — but loss of life mounts regardless. Apart from a propensity for cute girls to survive against the odds while guys get axed — or speared — the series has great promise so far. 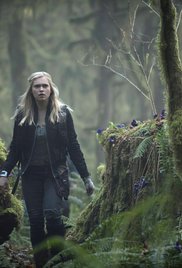 For more information, see The 100 wikipedia.